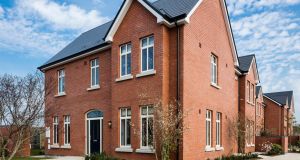 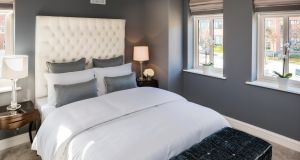 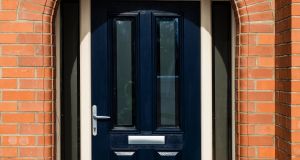 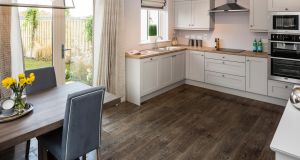 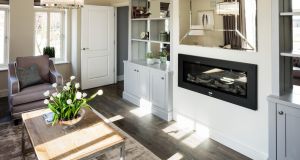 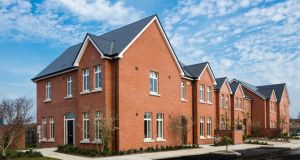 The redbrick finish and Edwardian proportions of some of Dublin’s quarters, including Ranelagh, Rathmines, Phibsborough and Glasnevin, have inspired Davy Hickey Properties’ first residential development since it built Ailesbury Wood in 2004 using the same Avon red brick.

Ceiling heights of 2.65m at hall level and just over 2.5m upstairs create a great feeling of space throughout.

“The idea was to look to the traditional housing stock of these villages to create new opportunities for families,” says Simon Walsh, the company’s development manager. “And to create the sense of community of Dublin’s older, inner suburbs: areas that still have a strong neighbourly feel,” said Michael Crowe, of the architect practice Conroy Crowe Kelly.

The development was planned 15 years ago – at the same time the redwood trees planted in the open area to the front went down, Walsh says.

The homes at Citywest Village feature many building classics such as arches made with bullnose bricks and granite paving. Co Mayo-based Grady Joinery made the Edwardian-inspired windows, which are about 20 per cent bigger than the standard for new homes, and they flood the houses with light.

When complete the 32-acre site will contain 339 houses and 58 apartments and will include a green modelled on Sandymount Green. It will be similar in scale and shape and it is hoped it will be as well used as the Dublin 4 park.

The interiors of the A3-rated showhouses are by Arlene McIntyre of Ventura Design and feature some lovely colour combinations including deep grey walls in some of the bedrooms and calamine pink in others.

In the three-bed homes there are two doubles, each with built-in wardrobes, and a single. The kitchens have been designed by Nolan Kitchens and do not include appliances.

Citywest Village is across the tracks from City West business campus, also developed by Davy Hickey Properties – and is home to blue-chip companies including Pfizer, Eir, Fidelity, Adobe and Unilever. More than 8,000 people work here.

Davy Hickey Properties also built Thornfield in Donnybrook in the 1990s and the developer, along with Harcourt Developments and Jim Mansfield’s HSS, contributed 55 per cent of the total €150 million cost (to the Railway Procurement Agency) to extend the Citywest Luas red line to Saggart.

Last year Harcourt Developments re-entered the Irish house-building market as well, when it launched Cúil Dúin, also in Citywest. The first 46 three-storey homes sold out within weeks and a second phase, comprising 30 homes, launched last week. Asking between €295,000 and €420,000 they are for sale through Hooke & MacDonald.

Most houses have parking spaces directly outside.