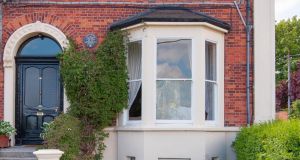 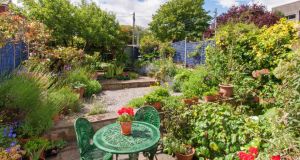 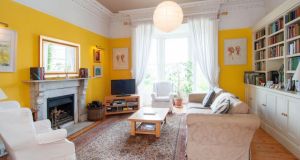 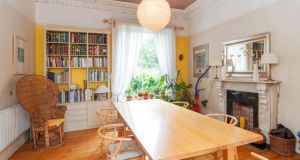 Towels and togs are hanging up on railings, drying in the sunshine along the terraces and lanes of Monkstown. Happy shouts of swimmers at Seapoint beach float up, perhaps making the kids out on the playground at Scoil Lorcáin think longingly of approaching summer holidays. Across the road, 1 Eaton Place basks in the delicious weather.

The back garden, which has featured on RTÉ, was originally laid out by Helen Dillon. Among the profusion of bright flowers, there’s an apple tree, a pond, and the original well. The owners, artists Ray and Linda Uhlemann, discovered this when they were laying the patio. It is now restored, and provides water for keeping the flowers happy during dry snaps.

Down some steps is a shady terrace for the garden flat, which is separate, but can also be reached from an internal staircase. The main house is laid out over three floors, with a pair of nicely proportioned reception rooms running front to back on the ground floor. These have their original features, including matching fireplaces.

The Uhlemanns, who have lived here for 30 years, have kept the house in lovely shape. A bright new kitchen at the back of the house has French windows leading to the garden, while upstairs they converted one of the original four bedrooms to become a marvellous bathroom.

The master bedroom is simply enormous, occupying the width of the first floor. This was once the main, formal, reception room, and there’s still an opening for the fireplace, should you want to convert it back, currently hidden behind large built in wardrobes. As it is it’s a dream of a bedroom.

“We lie here and watch the boats,” says Linda, who is a painter, printmaker and jewellery designer. Around the house, her series of prints of boats coming into harbour are testament to the inspirational views.

The second bedroom currently serves as a studio for Ray, also a painter, and the couple are loath to leave the area. “Dad was born round the corner, on Belgrave Road,” says Linda. But with grown-up children, the move makes sense, and the house is for sale by private treaty with Sherry FitzGerald for €1.375 million.

The house has a lovely atmosphere, and a plaque on the façade tells of how William Parsons, 3rd Earl of Rosse, and designer of the famous telescope at Birr Castle, came here for health reasons in the 1860s. No wonder.