Many twists in the tale of Castle Oliver 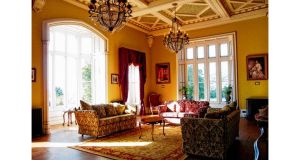 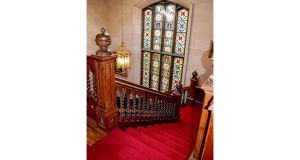 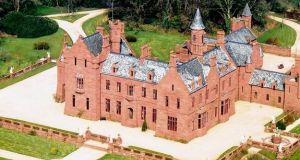 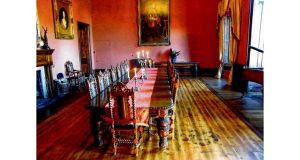 This estate was first inhabited by a Cromwellian soldier whose artistic descendents designed and built key features of the castle. After falling into disrepair it has recently been restored

This magnificent castle in the Scottish Baronial style, with views of the Ballyhoura Mountains, has been cared for and abandoned in equal measure.

Set on 15 acres (6 hectares), Castle Oliver which is for sale through Knight Frank for €2.95 million, features local red sandstone with stepped gables, corbelled oriels and a terrace with a pierced Jacobean parapet adorned with 5ft griffins keeping vigil.

When the current owners, Emma and Declan Cormack, a couple in their 30s, bought Castle Oliver in 2006, it was in a poor state.

Besides the interior having been looted, all the lead had been stolen from roofs and parapets which resulted in the collapse of ceilings.

The couple have restored the castle, right down to its original wine cellar with capacity for 55,000 bottles. This is accessed by an original stone spiral staircase that also leads up to the belfry via 97 steps.

The attention to detail is the most striking element in this impressive restoration project.

Luckily the 9ft oak doors were intact but all the panelling in the grand hall and the library had to be rebuilt.

In the drawing room, a minute part of a stencilled wall with heraldic crests of the original family remained and the Cormacks engaged a local artist to decorate the remaining walls which involved the stencilling, by hand, of 4,000 motifs.

Castle Oliver is the second castle to grace the lands here; the first was inhabited in the mid 1600s by Captain Robert Oliver, an officer in the Cromwellian Army and MP for Limerick.

The estate was passed down to Charles Silver Oliver, who had four children here, the youngest being Eliza, mother to Elizabeth Gilbert, later better known as Lola Montez, the Spanish dancer.

Lola, the castle’s most colourful character, was an adventuress who brought down a monarchy (Ludwig of Bavaria, to whom she was a mistress).

When her descendants Elizabeth and Mary Oliver Gascoigne inherited the estate in 1837 the castle was in ruins. These artistic sisters engaged architect G Fowler Jones to redesign the castle which was built for entertaining rather than defence.

They both designed and executed the wonderful stained glass in the main hall which was smashed by looters in the 1980s but the current owners have restored it.

The fine verre eglomise (gilded glass), also designed and made by the sisters, was taken for safekeeping in the early 1980s and now graces the mantelpiece in the ballroom.

The entrance is an impressive portico that in days of old protected people from the ravages of the Irish weather as they stepped out of their carriages.

Some of the oak floors are still in original narrow planks that complement the wonderful Gothic-style panelling and oversized oak antique furniture throughout.

The grand reception rooms, comprising the drawing room, ballroom, dining room and libraries, have high coffered ceilings. Only one original remains and is reputed to have been hand painted by the Oliver Gascoigne sisters.

The Cormacks had replicas of the other ceilings moulded and hand painted.

The corridors feature 18ft vaulted ceilings and some of the original sandstone flag flooring that withstood the looting and weather is still there.

It’s understood the Cormacks are keen to take on another restoration project, though the location has yet to be decided. Scotland or the warmer climes of Europe are some of the contenders.

Upstairs there are two wings, one with seven suites, with copper stand-alone baths and large four-poster beds. One of the beds, weighing half a tonne, is a replica of one the King of Norway owned.

Most bedrooms have fireplaces and views over the lawns. A further seven bedrooms, housed in the servants’ wing, are more modest in comparison with the grandeur of the suites.

The new kitchen is behind a secret door from the dining room and features hand-painted cabinets. There is a further wing extending to 557sq m (6,000sq ft) in the old stable and coachhouse block. The castle has been available to hire for private functions in recent times.

Castle Oliver is a treasure that has been meticulously and sensitively restored. The castle would make a stunning 2,136sq m (23,000 sq ft) home, and as for the rest of us, well we can dream.

‘Pilates made me more aware of how my body works’
4

What are your funeral options if you don’t believe in God?
9