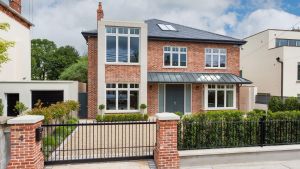 When No 4 Glenart Avenue in Blackrock came on the market two years ago it was a different house – literally. The buyer, a developer looking for a small residential project, bought the detached bungalow for €800,000 with the intention of knocking it and building two houses.

But he rethought that plan following advice that the market in this sought-after suburban area – where houses are big, with budgets to match – is for large high-spec family homes and so that’s what he built. It’s a smart-looking two storey, red-brick double-fronted house that from the outside nicely balances the modern and the traditional.

In a new build, a good indicator of the quality starts with the BER and this house is A2 rated which is something for a 402 sq m (4,327 sqft) house with an internal layout that features airy spaces and rooms with big volumes.

The triple height entrance hall is vast with oak parquet floors, a wide oak finished staircase leading up to an open landing. Light floods this area and further light pours through the large window on the second floor and the glazed double doors that open into the kitchen and living area that runs across the rear.

In a nod to tradition there are two reception rooms at the front on either side of the hall, both are good-sized and with fireplaces but it’s more likely that the family that buys number 4 will spend most of their time in the open-plan kitchen/dining/family room at the rear.

O’Connor’s of Drumleck built the simple cream painted kitchen with extensive storage and glazed detailing. There’s a large island unit topped with silestone and the appliances are Liebherr and Neff.

In the living area on the other side of this bright high-ceilinged room is a wall-mounted gas fire and along one wall a storage unit designed by O’Connor’s. There’s a fitted utility room – a downstairs toilet and wood-panelled cloakroom finished right down to a row of Shaker-style coat hooks.

This house is all about the detail you can see – and tech such as the multi-zoned underfloor heating system, solar panel metering, and an iPad-controlled alarm system that you can’t see.

Upstairs are five double bedrooms – the largest being a suite that includes a bathroom and fitted out dressing area. Two other bedrooms have en suites with the same Duravit and Hansgrohe fittings and smart tiling used in all bathrooms. The attic with its own landing and lobby will probably be used by whoever buys number 4 as a bedroom, particularly if they have teenagers.

Doyle Landscapes made over the front garden where there is parking for four cars, and the rear garden has a granite finished patio area, sensor controlled lighting and a lawn fringed with flowerbeds. An outhouse is tucked in one corner.