Labour of love in Terenure redbrick transformation for €995K 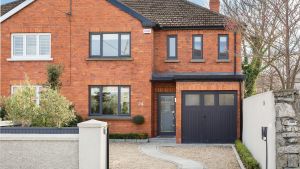 24 Terenure Road West is just a stone’s throw from the village junction in Terenure. It and its twin – number 22, were sold together in 2006 for €2.8 million, possibly with the aim of redeveloping them as a site. The house was put on the market again in 2013 when it was purchased by its current owners, Angela and Glenn Cahill, for €515,000.

“It was the rear south-facing garden that was the real selling point – as the property itself needed quite a lot of work” says Angela. Together with architectural firm DMVF, the couple completely transformed the property, adding a spacious light-filled extension to the rear.

“During the renovations, at 28 weeks pregnant I was admitted to Holles Street hospital for 10 weeks, so I purchased everything online,” says Angela. She also used this time to plan the couple’s wedding: “in a way it kept me sane as 10 weeks is an awful long time to be bedridden”.

The transformation saw an old galley kitchen and lean-to replaced by a vast open-plan kitchen and dining area which in turn leads up to a library nook and informal living room. An entire wall of glass to the rear floods the room with light – further enhanced by Velux windows overhead.

The taupe kitchen by Domino Design features a Silestone island with buckets of storage. Attention to detail is evident in the extractor fan – which lies flush in the ceiling allowing the room to be streamlined.

To the front of the house lies a formal living room, which has an open fire and the triple-glazed windows block any sounds from passing traffic. The house now has a BER rating of B3.

Part of the garage was converted to provide a downstairs bathroom and storage within the house – there is further storage in the attic which now has a Stira.

Besides the proximity to the village of Terenure, the excellent design and turnkey condition of the property, it is the 15m south-facing garden that will appeal to buyers.

Bitten by the bug of renovations, Angela is seeking another project and has placed her 155sq m (1,668sq ft) home on the market with an asking price of €995,000 through Lisney.