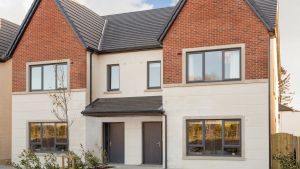 While recently there has been much talk about the impact of working from home, we have been temporarily relieved of the daily school run and all the stresses that brings to parents of young children struggling to wrangle themselves and small people out the door daily in a timely fashion.

Eastmount, on the edge of Delgany village in Co Wicklow, has all of this figured out. The new houses, mainly four-bed semi and detached homes, are situated across the road from St Laurence’s National School on Chapel Road. It is so close that the sounding of the first school bell would probably still leave time to down the last spoonful of cereal at the breakfast bar and be at the desk in time for roll call.

Situated in the former grounds of an old Georgian estate of the same name this elevated site is the latest by D|Res, which also bought and recently sold on the original estate house beside the new scheme.

Studio Design Squared, also used by Cairn Homes for its Marianella and Hanover Quay projects, was enlisted to help with the development’s look and feel.

Aideen Leahy, its in-house interior designer, is the creative design manager and it’s that additional layer of careful consideration that has helped create well-appointed abodes. With 2.7m ceiling heights and large windows, the units are about 15 per cent bigger than average, say D|Res director of housing Kevin Durkan.

The showhouse is slightly larger. Extending to about 143sq m/1,539 sq ft the layout includes a well proportioned square sitting room where there is enough wall space to install the vast contemporary sofa style families tend to love. This type of house is asking €550,000.

To the rear is an L-shaped eat-in kitchen with a second living space set out into the garden. This space has been zoned so you can’t see the kitchen units when enjoying screen time on the sofa.

The kitchen is painted in tones of blue, a deep inky shade on the island while the rest of the units are the blue of Connemara summer skies. The Nolte design, supplied by McNally Kitchens, features a slim door which is a contemporary take on the traditional shaker style. The Pietra countertops by Silestone feature earthy tones that are picked up in the upholstery of the custom furniture designed by The Interiors Project. The uPVC windows are two-tone; soft white internally and a dark grey on the exterior.

Off the kitchen is a utility room with a handy back door and it’s where the heat pump is also located.

Each home has more than nine cubic metres of storage space in the hall and landing. The staircase is by George Quinn with Vienna newel posts.

The property’s four bedrooms radiate off the landing, three doubles and a good-sized single, with the latter currently configured as a home office given the rise in their popularity during lockdown, Durkan says.

The A2 Ber-rated and nZeb regulation compliant houses are part of a development of 74 that will straddle both sides of a newly constructed road and are within 200m of the school. Many of the houses have sea views from an upstairs window and fine vistas to the leafy green slopes of Glen of the Downs and Soldier’s Hill.

No buns, no sauce, no fries, no wedges: How to make the perfect chip butty
9