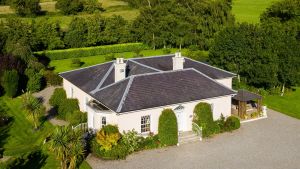 The owners of Wolfstown House, at Eadestown near Naas, Co Kildare, did not set out to buy it in 2005. They considered it only because it was just within their search area when they decided to move from Dublin. Having drawn a circle on a map with a compass, Len and Patricia Regan walked in the door and knew it was home.

The builder of Wolfstown House completed it over six exacting years from 1999, blending Regency style with modern convenience, and formal detailing with easy comfort. Set in the gentle roll between Naas and Blessington, the lush site encompasses more than 1.2 hectares (three acres) with paddocks by the driveway, formal lawns, rich planting, woodlands, and a kitchen garden. It is for sale at €925,000 through Sherry FitzGerald Country Homes.

At the top of the driveway, up three granite steps and through double doors, the period-style details are evident from floor to cornice, and the three reception rooms open off the wide yellow hall. To the right is a welcoming sittingroom, with a handsome wooden fireplace and doors to both kitchen and garden. To the left are two reception rooms – one a rich blue diningroom, where the table turns for snooker – and both floored in planks salvaged from a local church.

To the front is a grand golden drawingroom, dual aspect, with a Carrara marble fireplace and French windows in the bay. These open to a classical statue on the border of the rolling sweep of green that invokes a feeling Len describes as indescribable.

It’s a tranquil, peaceful place steeped in nature, from passing deer, falcons, buzzards and wild ducks, to long-stay broadleaf forest augmented by the Regans’ planting of hundreds native trees. Their additions include 15 outdoor seating areas that take advantage of the views, including a bench that overlooks a lake on the next-door property.

It’s not all relaxation, however; there is always some work to do in the polytunnel where courgettes, tomatoes and lettuce are flourishing, and the fruit trees, currant bushes and raspberry canes are busy yielding produce for jam, and for a signature vodka.

During lockdown, Len devised a 20-minute fast-walking circuit in the grounds but buyers who like to exercise on horseback could think about populating the paddocks – Punchestown is the closest of the three racecourses within range.

Back inside, the accommodation is located at the rear of the house, through a door with a stained-glass panel. There are four double bedrooms, of which the main one is en suite and the next, past the main bathroom with bath and wall-mounted cistern, has been fitted out as a dressingroom.

The long, bright kitchen has country-style units painted white, with ample space to dine and to lounge. Outside this is a wooden gazebo that works as a home office, an entertainment space and as yet another place to absorb the openness.

With electric gates, video security, zoned heating and an integrated sound system in its 223sq m (2,401sq ft), Wolfstown House has all the quality of finish that someone wanting a low-maintenance bolthole could wish for.

At the same time, the single-storey layout makes it a long-term prospect for many, and during lockdown the couple, who run a digital company, Red Square Media, worked easily from different parts of the house. For work reasons they are moving back to the capital, which is 45 minutes away by car.

Amenities abound in nearby Naas and Blessington, just over the county boundary in Co Wicklow, is rich in outdoor pursuits including walks and watersports at the reservoirs, mountain bike and running trails at Glen Ding Wood, and more sedate outings to Russborough House.

Ross O’Carroll-Kelly: ‘I’ve never been much of a conversationalist, but I’m on fire with this woman’
8