Georgian grandeur beside Phoenix Park for €950,000 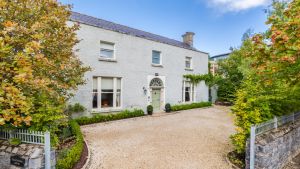 A Georgian house is a marked contrast to the houses around it in a relatively new neighbourhood near the Royal Canal, a little over 1km from the Phoenix Park’s Ashtown gate. Pelletstown House, a 345sq m (3,713sq ft) detached five-bed, was refurbished by developers Castlethorn, who built Pelletstown Manor, a mixed development of 105 houses and apartments, in the early noughties.

Pelletstown House is in the middle of the development and one of its owners, who bought it in 2007, says: “I absolutely love it. It’s a quiet neighbourhood and you have security.”

They are moving to Cork for job reasons and the house is now for sale through Lisney for €950,000.

The house was given a major makeover and the owners have furnished and decorated it in period style. The house was re-roofed, rewired, replumbed, and the owners continued to add their own touches – last year, for example, they added panelling in one of the front rooms. One of their favourite features is the front hall, with its 200-year-old encaustic tiles and a plaster frieze in the ceiling.

Accommodation includes two reception rooms on either side of the front door, which has an elaborate fanlight over it. Both have ornate fireplaces and deep coving. A diningroom, further down the hall, has a fireplace with marble surround. There is another reception room at the end of the hall and a fully tiled shower room.

The kitchen-breakfastroom has a tiled floor, pale cream units, an island unit and a black Rangemaster gas stove with white subway-tiled splashback. There is a utility room off it and French doors open into the garden.

Upstairs are five double bedrooms, two en suite; one of the bedrooms is used as a dressingroom. Some are strikingly decorated with bold colours; some have fireplaces. The family bathroom is fully tiled and has a freestanding Victorian bath and shower.

The garden, relatively small in comparison to the size of the house, was designed by landscape gardener Paul Martin and is fairly private, surrounded by stone walls with trees screening views of the neighbouring houses and apartments. It’s two-tier, with a paved patio outside the kitchen, stepping down through a wisteria-covered arch to a children’s play area with artificial grass. There is parking for three to four cars in the gravelled front garden.

Pelletstown is a pretty new Dublin neighbourhood, an area between the Royal Canal and the Tolka River 4km from the city centre, northwest of Cabra. It is close to Ashtown train station; a Pelletstown train station being built now is due to open in 2021.