From bleak to chic on leafy Dublin 6 square for €1.2m 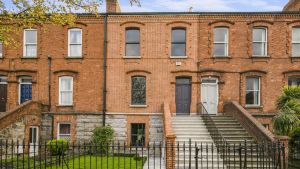 Grosvenor Square is one of Rathmines’s finest squares and home to Stratford Lawn Tennis Club and Kenilworth Bowling Club, which share its green space. Situated on its east side is number 13. Built in 1891, it was once the office of the bowling club, where members used to drop in for a cup of tea, explains owner Luke Walsh.

A builder who signed up as an apprentice carpenter the day after his Leaving Certificate results, Walsh learned the ropes at his dad’s company, Premier Building. It was there, he says, that he learned to take pride in his work, and to take pleasure from bringing out the beauty in buildings.

Walsh estimates that he has renovated about 45 two-storey-over-basement properties to date, having branched out on his own a few years ago.

Last year, when he first saw this three-bed Victorian redbrick, it had been vacant for about a decade; although it appeared to have been subdivided into flats, there were signs that another builder had started to renovate it, possibly back in the boom, he says.

Several of the windows were boarded up, and he viewed it by torchlight, as there was no power, says agent Ivan Tuite of O’Connor Shannon, who sold the property to him for €820,000 in September 2018. It had come on the market in March that year seeking €1 million, but costly refurbishment works were enough to deter potential bidders.

It looked daunting, Walsh says. But even in that raw state he recognised the workmanship of the listed structure. The hall and reception rooms have 3.2.m-high ceilings and fine cornicing and ceiling roses – none of the rooms had been properly subdivided (a process that can ruin the plasterwork), which meant the Old Mould Company only had to do very minor stucco repairs, he says.

The room’s matching marble fireplaces were pristine and the original interconnecting doors had been boarded up. All the original pitch pine architraving, doors and window boxes and shutters were retained. He repaired every original single-glazed window, reweighting and repairing the sash cords in each.

Now the house is a fine family home, transformed from bleak to chic. The hall has wainscot-level panelling painted in soft tonal shades of eau de nil by Colortrend. Underfoot is a solid walnut parquet, stained a rich espresso and supplied by Design Emporium in Deansgrange.

Downstairs at garden level the ceiling heights are also impressive, extending to more than 2.6m, and with its large window to the front this floor does not suffer from dark-basement syndrome but instead is washed in light. The kitchen is set to the rear, where double doors have replaced the original rear window and open out to a small decked area.

Supplied by Crumlin-based Customtone, the kitchen has chrome D-ring handles and a pantry lined in solid oak, while the rest of the presses are lined in a linen-look material. There are smart stone countertops, and upper storage units backlit through opaque glass doors add warmth. A couple of steps down lead to a utility room with NordMende appliances and a windowed guest toilet.

The east-facing garden gets evening sun at the far end and extends 23m to a pedestrian rear access, where, subject to planning permission, the next owner could apply for vehicular access.

The first of the three bedrooms is on the hall return and has views across to Cathal Brugha barracks; the two other doubles are on the first floor. Both have built-in wardrobes also by Customtone.

The main bedroom suite is to the front and has gorgeous views of the square and beyond. Adjoining it is the en suite, where there are his-and-hers sinks and a fine 1.2m-wide shower stall. The soaring ceiling heights here give every room a great sense of light and space.