The Italian draughtsman died nearly 100 years ago. Few of his visionary plans were built, but some came close 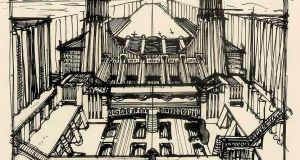 A station for trains and aircraft envisaged by Sant’Elia 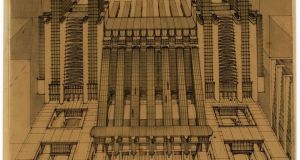 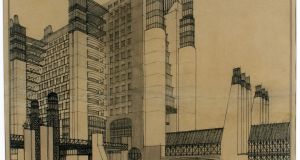 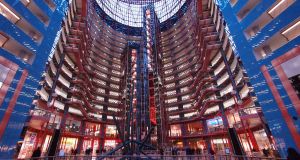 The James R Thompson Center in Chicago, designed by Helmut Jahns, who was influenced by Sant’Elia 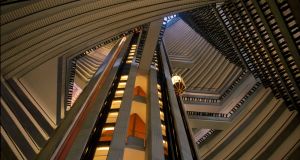 The Marriot Marquis Hotel in Atlanta, Georgia, designed by John Portman, who was influenced by Sant’Elia

This year is the centenary of the death of Antonio Sant’Elia, who is considered one of the finest draughtsmen in the history of architecture.

Yet few of his plans were ever built, which is quite an anomaly considering the influence and quality of the drawings made by the Italian. A similar comparison would be if the songs of George Gershwin or Cole Porter had never been performed; Sant’Elia’s sketchbook is like the Great American Songbook, unsung.

Born in Como and a builder by trade, Sant’Elia became an integral part of the Futurist movement in Italy.

Italian writer and poet Filippo Marinetti was the ideological founder of Futurism, publishing his manifesto for the movement in Paris newspaper Le Figaro in 1909: “For too long has Italy been a dealer in second-hand clothes. We mean to free her from the numberless museums that cover her like so many graveyards”.

The artistic movement rejected traditional forms and embraced the revolutionary possibility that technology could bring to culture, cities and modern living.

Marinetti’s words were bricks for a Modernism he wished others would build and the ideas took hold in his homeland, with painters, sculptors, musicians and architects such as Mario Chiattone and Sant’Elia adapting them into their work.

Futurist ideas travelled as far as Russia, influencing Vladimir Mayakovsky and Kazimir Malevich, among others. But the movement lost credibility when Marinetti began to couple Fascism with the movement. He became a vocal supporter of Benito Mussolini, and continued to glorify the idea of war. Sant’Elia opened a design office with Chiattone in Milan in 1912, where he created his bold and vivid sketches that would have a profound influence on Modernism. In the heart of a bustling metropolis that was undergoing major industrial and population growth, Sant’Elia worked on his grand design for a futurist city, Citta Nuova (New City), made up of monolithic and monumental skyscrapers with bridges and walkways that cut across the sky.

He wanted the modern city to be a living, functioning organism; built with dynamism, speed, straight lines, with the man and machine at its heart. Although people do not feature in his drawings to give a sense of scale or society (“Futurist architecture . . . is not an arid combination of practicality and utility, but remains art, that is, synthesis and expression”, he wrote), many of the designs give a feeling of activity and existence. We can imagine the commotion among the calm construction.

In fact when you look closely at the drawings, they appear almost too beautiful, too perfect. And if they are too perfect for the eye to behold, what do the designs mean to the engineer?

Nevertheless, the modern world has come close, or at least tried to, in replicating Sant’Elia’s ideas; see Helmut Jahn’s James R Thompson Centre in Chicago and the Marriott Marquis hotel in Georgia by John Portman (both built in the 1980s).

In 1914 a manifesto entitled Futurist Architecture was attributed to Sant’Elia. It was an important document outlining a new world of architecture, where the city is dynamic, modern and huge. Streets and squares were to be done away with; our space was to be lifted skywards.

It had a radical flavour: “We must invent and rebuild our Futurist city like an immense and tumultuous shipyard, active, mobile, and everywhere dynamic, and the Futurist house like a gigantic machine.”

And: “We feel that we are no longer the men of the cathedrals and ancient moot halls, but men of the Grand Hotels, railroad stations, giant roads, colossal harbours, covered markets, glittering arcades, reconstruction areas, and salutary slum clearances.”

In this context, it is easy to understand how Sant’Elia’s drawings influenced the cinematic worlds of Ridley Scott’s Blade Runner and Fritz Lang’s Metropolis; both directors dreamed of cities in the sky too.

Sant’Elia’s drawings survive and many can be viewed at Pinacoteca, Como’s art gallery. Yet the father of Futurism did not live long enough to see the movement become bastardised in its sordid relationship with Fascism. He joined the army as Italy entered the first World War, and was killed in battle in October 1916.

One hundred years since his death, our buildings have yet to catch up with him.