Out of the rat race and into the chicken run 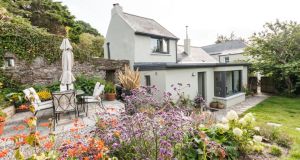 The restored Orchard Cottage at Dunowen, which is for rent 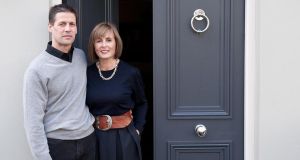 Kela and Stephen Hodgins, the latest proprietors of Dunowen House, who swapped their workwear for wellingtons 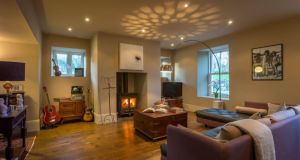 The living room in Dunowen House 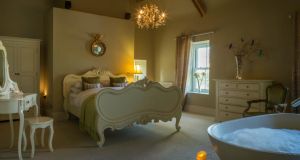 The master bedroom in Dunowen House 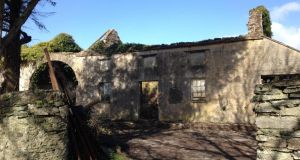 The coachhouse, before renovation, where Kela and Stephen Hodgins now live 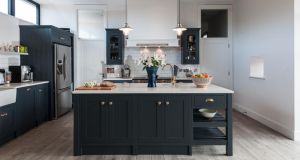 The kitchen in the coachhouse 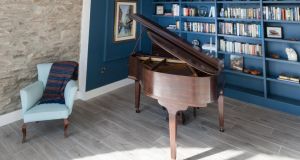 The music room in the coachhouse 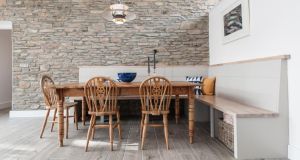 The kitchen table in the coachhouse

Conversations with Kela and Stephen Hodgins, the latest proprietors of Dunowen House in Clonakilty, Co Cork, bring to mind scenes from the 1970s British comedy The Good Life. The Hodgins were once an urban couple. In their 40s and fed up with the mundanity of commuting, congestion and commerce in the city, they took to the countryside to establish a new life.

Unlike the Goods, though, they were taking their three children, two of whom were teenagers.

Having sold their home near Mount Merrion in Dublin in 2013, the couple, who worked in marketing and finance, swapped workwear for Wellingtons after buying Dunowen in Clonakilty, Co Cork.

The Georgian farmhouse, built by George Sandes in the late 1700s, sprawled to 615 acres, tended by a gardening staff of 20 who were summoned to their meals by a bell tower that still stands.

Now the estate extends to a more manageable four acres, one of which is the walled kitchen garden, since restored by the couple, who planted an array of greens and garlic, with aubergines, tomatoes and peppers filling the greenhouse. Future Forests in Bantry is advising the family on planting a selection of native trees to provide habitats on the lands that will nurture local wildlife.

The family’s first attempt at animal husbandry saw their chicken stock fall prey to a local fox, but now the self-proclaimed Dubs have learned to outsmart the village vixen.

“Our friends kept telling us we were so brave, which I really took to mean ‘are you both mad?’, but perhaps it was our naivety that made this project work,” says Kela.

“Fortunately, the house was in perfect condition and just needed furnishing,” but the couple had limited time to restore the cottage “where we, Stephen, I and the kids lived while establishing the business”.

Initially running the house as a B&B, after a time it became apparent that the best way forward was to rent out the main house, which sleeps 18, on a self-catering basis. After restoring the cottage, the next task was to tackle an old coachhouse, which Kela says was “crumbling”.

In just two years, the couple established a thriving business. The house is booked for most of 2016 and parts of 2017. They also restored two derelict houses, using Edge Architects in Clonakilty. One, Orchard Cottage, is now for rent and the coachhouse is home to the Hodgins. “We put ourselves under an enormous amount of pressure. Trying to get everything done on time was very challenging. I don’t know how we didn’t kill each other,” says Kela.

The village celebrates the musician each year on the anniversary of his death, when musicians descend from around the world.

The property was then bought by a consortium which included 1980s pop singer Nik Kershaw, who had visions of creating a musicians’ retreat and exclusive country house. “We found lots of Noel Redding’s furniture and memorabilia in an old shed, which included an original telex inviting Redding to feature in the Rock and Roll Hall of Fame in Ohio,” Stephen says.

The pair restored the furniture and framed the many Rolling Stone covers, which now hang throughout the house in homage to Redding. The rest of the furniture they bought from Kershaw, adding to their own collection accumulated over the years.

Kela, who has a keen interest in cooking, offers a dinner-party service in conjunction with the rental. “Almost every booking requests a dinner for their stay at Dunowen, and the majority of bookings this year are from American tourists.” Diana Dodog, winner of MasterChef Ireland in 2014, caters for larger events and her occasional pop-up restaurants are a big hit with guests.

This is the couple’s eighth home, but from the fondness they express for the local area – “the beach is a five-minute stroll, the kids are enormously happy in their new schools and members of local GAA, rugby and hockey clubs” – Dunowen appears to be where the Hodgins have finally decided to roost.

“I cannot believe our luck; this is like a second life experience. The kids spend the summers surfing on the beach and I don’t have that Sunday night anxiety of Monday morning meetings,” Stephen says.

Next on the list are an apiary and pigs. It seems the Hodgins family, after much hard toil, have realised their dream of sustainable country life and are, in the words of the late Jimi Hendrix, about to Let The Good Times Roll. See dunowenhouse.ie