Hipsters and roosters: Making a nest in Stoneybatter

After a stint in Brussels, Dubliners Kate Cunningham and Conor O'Neill are putting down roots in D7 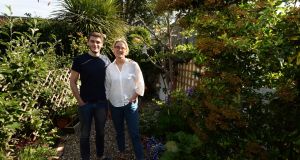 The picture of the chicken made the subject matter of the post immediately clear. “Anyone missing a chicken?” reads the caption. You’d be forgiven for assuming this Facebook message hails from some rural enclave where hens roam free and kindly neighbours roll up their sleeves, dust off their cotton aprons and return same to rightful owners.

The post was, in fact, on a neighbourhood group page for Stoneybatter, Dublin 7 – for the uninitiated, a stone’s throw from the heart of Dublin city. And while wandering chickens are not exactly plaguing the byways of the place, it’s the sort of neighbourhood where, according to Kate Cunningham and Conor O’Neill, you wouldn’t be at all surprised at some concerned resident having the initiative to take in your wayward lifestock and get on the bush telegraph.

“Stoneybatter is the kind of place where, if Lou Lou got out, you’d know one of the neighbours would take her in and find you. The first day we moved in, Ann, who lives on one side of us, and Mary, who lives on the other, called in to say hello. There was an immediate welcome. There’s a strong sense of community. I’m involved in managing one of the community gardens now, so that gives me a big involvement. It’s how I get to know people in the neighbourhood.”

The young couple moved to Stoneybatter just over a year ago. After coming home to Ireland from Brussels, their early attempts to find rental accommodation were, says O’Neill, very tough. They were staying in a single bed in Cunningham’s parents’ house and wanted to find something quickly. They have decent jobs. Cunningham is events and communications officer at The Irish Writers Centre. O’Neill is a researcher and adviser in Seanad Éireann. Their salaries are about on par with what they earned in Brussels, but finding accommodation in Dublin was harder than they had anticipated.

“It wasn’t even down to just finding somewhere nice, like we had in Brussels. It was hard to just, for example, find some place with insulated windows. Viewings were almost a carbon copy of each other. They’d be at a set time. You’d turn up to find 50 or 60 people and one person with fact sheets. You’d be told to show yourself around. We must have done that 20 times.”

They were lucky, in the end, to find the place they now rent. O’Neill puts it down to an obscure online listing that didn’t attract swarms of other hopeful tenants.

“The photos looked like they had been taken on a 20-year-old mobile, by someone who had rushed out in the dark and jumped up on a trampoline before taking them.”

They may not have even viewed the place themselves, but for the fact that, relative to other places, the rent was a bit lower.

The house, a cottage they describe as being like a little Hobbit house, is certainly, as estate agents might say, bijou, but they consider themselves lucky to have found the house, which they’ve grown to love.

“It definitely feels like home,” says Cunningham. She is sitting at her garden table, looking about at the results of the hard work she’s put into their little patch of ground. “Within two months of moving in we’d done the place up. I find it hard to feel transient in a place. We’re nesters, really. In the garden I’ve pulled up trees and planted long-term evergreens that we’re never going to see mature, but I don’t see the point in living somewhere if you’re not going to make it a home.”

O’Neill agrees. Stoneybatter, he says, has been getting a reputation as quite a hipster neighbourhood.

“It’s an old Dublin community, and you do have to be mindful of that and fight against it being gentrified and losing its heart.”

He talks about the Brains of the Batter, a pub quiz they attended shortly after moving to the area.

“There was a ‘Stoneybatter’ quiz round with questions like – who first opened such and such a chipper on such and such a street. The MC spent the evening riffing on, ‘Now all the hipsters in the corner in your skinny jeans, you won’t know this because you’re only blow-ins. Stick around for another 10 or 15 years and you might get it.’ But it was really friendly and familial.”

“Yeah, there’s such a mix of people here,” says Cunningham. “Ann next door is third-generation Stoneybatter. This is her great-grandmother’s house. And then there’s us, new to the place, but very welcome. It restores my faith in Dublin communities. The Stoneybatter Facebook page has nearly 2,000 members. If someone’s alarm is going off or their cat is missing, people post on there.”

And the chicken? Was the stray chicken situation resolved?

“Oh yes,” says Cunningham. “Joshua the chicken has been happily reunited with her owner. Of course she has. This is Stoneybatter!”

Vol-au-vents are back: puff pastry towers get a timely, tasty makeover
6

Before you buy an e-scooter for Christmas, read this
8

Aoife Noonan’s How to be a Better Baker Part 4: Lemon meringue pie of dreams
10