Around The Block: Lansdowne Place will be a real test of the luxury apartment market 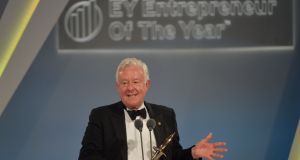 Stephen Vernon of Green Property has snapped up a penthouse at Lansdowne Place for €3.5 million

Plans for Lansdowne Place, the eagerly awaited luxury apartment development in Ballsbridge, are moving apace. Just this month Chartered Land, led by developer Joe O’Reilly, submitted an application seeking the addition of two extra penthouses to the 215-unit scheme. And why wouldn’t they, given the recent successful sale – off plans – of one of just three penthouses in the existing scheme?

The Block understands that the buyer is none other than Green Property boss Stephen Vernon. With the going rate for luxury apartments in Ballsbridge having breached the €1,000 per sq ft mark of late, word has it that Vernon will shell out around €3.5 million for his lofty new digs. The property mogul purchased his current three-storey period home in nearby Ranelagh for reportedly over €3.4 million in 2006 after it was withdrawn from auction. More recently, in 2014 he picked up a West Cork retreat, paying €1.7 million for a modern seafront property in Glandore.

While all the apartments on the former ill-fated Seán Dunne site are generously sized, there are three exceptional penthouses. Each spans the entire seventh floor of three of the five blocks, and are likely to appeal to Ireland’s wealthiest downsizers. The three-bed penthouses each offer 310sq m (3,340sq ft) of internal accommodation, and each bedroom will feature ensuite bathrooms, while two of the bedrooms will also have their own dressingrooms. The accommodation includes triple-aspect 126sq m (1,360sq ft) open-plan living, kitchen and dining rooms, with unobstructed views over Dublin city and opening out to private 48sq m (517sq ft) terraces.

Lansdowne Place looks set to be a real test for the high-end apartment market, which has been gaining momentum. The most notable high-end new developments in the Ballsbridge area last year were Embassy Court and 55 Percy Place. Average prices of about €1 million were recorded at the two developments, attracting buyers such as developer Danny Durkan and Monex boss Frank Murphy. There were, however, just 28 apartments in all between both schemes, whereas the first phase of Lansdowne Place will feature at least 215 units, with a further 296 permitted for phase two. Quite the ramp-up at the luxury end.