Who would've thought Prince Charles's garden would be so on trend? 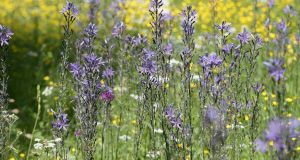 If the rumours of recent weeks turn out to be true, then a certain member of the British royal family will be paying a visit to Kilkenny any day now. For most, the news of Prince Charles’s impending arrival will serve as another reminder of just how much the Irish political landscape has mellowed in recent decades. But if you’re an organic gardener, his visit underlines his significance as the unlikely figurehead of a global environmental movement championing sustainability and seasonality.

He’s the man who famously said in a 1980s television interview, much to the derision of the popular press, that kitchen gardeners should talk to their vegetables to get the best results, the tree-hugger who regularly highlights the environmental perils of deforestation, soil erosion and the use of agrochemicals, and the royal thorn-in-the-side of climate change-deniers such as US president Donald Trump. He’s also the person whom the American chef, food revolutionary and organic gardening activist Alice Waters recently described as “one of the most forward-thinking, radical humanitarians I have ever talked to”. Which is some praise coming from a woman that Time magazine has described as “a hero of the environment” in her own right.

I was reminded of all this recently when I was given the opportunity to take a tour of Highgrove, the prince’ s 15-acre country garden near the postcard-perfect village of Tetbury in the heart of the Cotswolds, which he’s developed over the last 37 years. Back in the 1990s, I’d begun hearing whispered descriptions, though horticultural circles, of Highgrove’s “weedy” paths, its roses left unsprayed against aphids and its un-manicured, informal lawns, untouched by selective herbicides, where wildflowers were encouraged to grow. Like many, I found it intriguing. Here was a man who seemed the embodiment of conservative British pomp and ceremony defiantly insisting on the use of sustainable, wildlife-friendly gardening methods, despite the fact that it exposed him to a huge amount of public criticism and ridicule.

The fact that the organic gardening movement is now a mainstream one – that people no longer see environmentally minded gardeners as “bearded, be-sandalled, shaven-headed mystics who retreat every now and then to the Hebrides or the Kalahari Desert to examine their navels and commune with the natives” (as humorously if somewhat testily described by Prince Charles back in the late 1980s) – is partially down to the work of this eccentric, sometimes contrarian, eco-pioneering monarch-in-waiting.

Take, by way of example, the growing awareness of the importance of species-rich wildflower meadows as a valuable reserve for both plants and wildlife. Highgrove’s own wildflower meadows, which have been several decades in the making, began life with the help of the late Miriam Rothschild, the British author and conservationist enlisted by the prince to advise on the best way to restore life and species-diversity back to its grasslands, which had been debased by decades of chemical use on the part of the previous owners. Visit the gardens in late spring/early summer, and you’ll see these meadows at their glorious best, when mown-grass paths curl through vast swathes of sky-blue camassias, purple alliums, yellow buttercups, ragged robin and a host of other wildflowers. You’ll also hear the happy hum of the gazillions of pollinating insects who depend on it as a habitat.

The growing popularity of organic kitchen gardening and the joys of seasonal, sustainably produced, homegrown food? Again, this eccentric prince has helped to lead the way. Highgrove’s organically-managed, magnificent walled kitchen garden is not just a thing of great beauty but also one of impressive productivity, its soil nourished by regular applications of farmyard manure as well as copious quantities of garden compost produced on-site. As for the global movement towards a less-primped, wilder way of gardening? One of the things that struck me during my tour of Highgrove was its surprising sense of informality, intimacy and fun, from those aforementioned wildflower meadows to the double avenue of golden yew trees that have been clipped and pruned into a variety of strange shapes reminiscent of something out of Alice in Wonderland.

Visitors are also seduced by the gothic beauty of the gardens’ famous stumpery, the work of well-known British garden design duo Julian and Isabel Bannerman. It’s yet another eco-friendly example of how materials so often treated as worthless garden waste (in this case, the uprooted stumps of sweet chestnut trees) can be creatively upcycled, their upturned forms not only acting as a sculptural scaffold for a host of shade-loving plants, but also providing a wonderful habitat for garden wildlife including hedgehogs, frogs, toads and insects. Indeed, even when it comes to the environmental relationship between a family home and its garden – how to treat/recycle, in the most eco-friendly way, the food waste, grey water and sewage that’s produced – this very British prince has long been a trailblazer, proving that the world’s trailblazers are sometimes to be found where you least expect them.

Fionnuala visited Highgrove Gardens as the guest of Travel Department, the Irish holiday company specialising in a range of guided tours of the world’s best gardens. Travel Department’s next tour of Highgrove takes place in August as part of a three-day tour (from August 6th) of some of Britain’s best gardens, with well-known guide and gardener Frances MacDonald of The Bay Garden, see traveldepartment.ie.

Individual tickets to visit Highgrove (highgrovegardens.com) can also be booked independently and in advance by visiting its website, although high demand means that availability is limited.

Climbing and rambling roses, sweet pea, clematis and many other climbing plants make lots of new growth at this time of year. To prevent these quickly ending up as a messy tangle of stems, now’s the time to start using garden twine to gently tie any new growth on to some form of sturdy support, whether that’s a handsome wooden trellis or lengths of wire fixed against a wall.

Early May is a very busy time of the year in the kitchen garden/ allotment. Vegetables that can be direct-sowed into the ground include beetroot, early carrots, radish, peas, turnip, parsnips and spinach, while it’s also a good time to sow heat-loving crops such as courgettes, squash, runner beans and courgettes into small pots under cover for transplanting out later in the month. When direct-sowing outdoors, always make sure to weed/prepare the ground well and to take careful precautions against slugs/birds.

If you grow a lot of shrubs/perennials in tubs or containers, then this is a great time to give them a “top dressing” by scraping off the upper 5cm layer of compost and replacing it with a fresh layer of compost along with a sprinkle of slow-release granular fertiliser, preferably one approved for organic use.

Dublin’s Our Lady’s Hospice Open Garden Trail 2017 opens this month and continues throughout the summer until the end of August, with the funds raised helping to support the hospice’s patients and their families, see olh.ie for details