Want to get children gardening? Here’s how

Start with small projects such as growing sunflowers, potatoes and even oranges 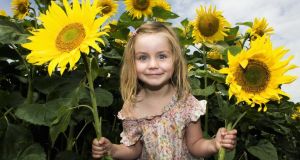 Visiting a gardening friend recently, my attention was proudly called to a young plant growing in a tiny pot. It was, of all things, a baby orange tree, no taller than a couple of centimetres, grown from a pip that my friend’s five-year-old grandson had sown a few months earlier.

His obvious green-fingeredness aside, what utterly charmed us both was the fact he’d sown and grown it off his own bat, proving the point that children are instinctively drawn to the magic of gardening. All they need from us is enthusiasm, a little guidance and some help with the heavy stuff.

So the next time your child snacks on an orange, why not challenge them to grow an orange tree? Just take the pips and sow them straight into small pots of damp compost, enclose each pot in a Ziploc bag and place somewhere warm and bright for several weeks until the seeds germinate.

Or for an even faster result, wash/dry the pips and then carefully peel away their outer woody casing to reveal the true seeds contained inside. Place these in a sandwich of wet kitchen paper, seal it in a labelled Ziploc bag, and put somewhere warm and bright. Once you spot obvious signs of germination, those baby orange tree seedlings can carefully be potted on, watered, and placed in a sunny room or porch. It’s as simple as that.

Alternatively, dare your child to grow the world’s tallest sunflower. Okay, the present Guinness World Record (9.17m, or just over 30ft ) is a tough one to beat but children love a challenge. To grow a truly giant specimen, buy seed of ‘Mongolian Giant’ (Thompson & Morgan) or the towering ‘Giraffe’ (Suttons).

Sow individual seeds into pots filled with seed compost (between now and late May), water well, place somewhere bright, frost-free but not too warm, and encourage your child to watch out for signs of germination.

Keep the baby plants well watered (but not sodden), after which it’s a simple matter of transplanting them outdoors in late spring into the ground or large tubs, making sure to provide a fertile soil in a sunny spot, take precautions against slugs and give some form of support.

As well as being a whole lot of fun, those cheery flowers also provide plenty of ways for children to love and cherish the plant world, from studying the Fibonacci patterns found on ripening seed-heads to adding the edible petals to a salad, or measuring themselves against these fast-growing plants and watching the way the seeds provide food for garden birds.

Lets not forget the potato. Unofficially our national food, its long and complex history of cultivation so inextricably intertwined with Ireland’s cultural and political history that the growing of the humble spud is (or at least should be) a rite of passage for every Irish child.

When space is tight, plants will do just fine in a large, deep tub or container as long as you give them a sunny spot, rich fertile soil enhanced with a handful or two of organic granular fertiliser, and keep them well watered. Now is a great time to plant the tubers or ‘seed potatoes’, which are widely available from most good garden centres.

If you want your child to learn first-hand about the devastating effects of blight, get them to plant two varieties: one known to be particularly susceptible to the disease (examples include ‘British Queen’) and one with proven resistance such as ‘Sarpo’. Recommended stockists of the latter include mrmiddleton.com and fruithillfarm.com while small numbers of historic varieties such as ‘Lumper’ are available to school gardens by request from TOPS Potato Centre  in Co Donegal (agriculture.gov.ie).

Gardening isn’t all about the great outdoors, and there are plenty of houseplants that children will also have fun growing. Examples include the ‘String of Hearts’ vine (Ceropegia), a fast-growing, drought-tolerant, decorative trailing plant that’s perfect for growing in a hanging pot suspended from the ceiling to best display its ornamental dangling stems (available from howbertandmays.ie).

Children also love the magic of a garden in miniature, which is why terrariums are a guaranteed hit. You can make one together (see stormthecastle.com) using a large glass Kilner jar or fish-bowl into which you’ll need to add a shallow (2cm) layer of pebbles, then a 5-8cm deep layer soil or compost.

If it’s a closed terrarium, the plants will need to be species that thrive in humid conditions (examples include various species of Pilea, Pepeoromia, Begonia and Hypoestes) but an open terrarium using drought-tolerant succulents (available from most good garden centres) is a better choice for young children. Using a set of chopsticks, simply poke small holes into the compost and position the plants, then water lightly.

If making one sounds like too much of a challenge, you can order ready-planted terrariums see thegarden.ie, preciouspetals.ie). Adding some ornamental pebbles and a few tiny toy soldiers or miniature figures will, or course, win you extra brownie points.

If you’re growing lots of young vegetable and flower plants under cover for transplanting out into the garden later this year, bear in mind that a weekly liquid seaweed feed will help hugely in growth, vigorous root formation and general plant health and disease-resistance. Always follow the manufacturer’s instructions regarding dilution rates (the ratio of concentrated feed to water) as young seedlings can be damaged or even killed by concentrations that would be fine for larger, established plants.

While spring’s warmer temperatures and longer days are always welcome in the garden, it also means it’s time to start being extra vigilant in keeping container-grown plants well-watered. To judge whether a pot needs watering, stick the tip of your index finger into the compost. If it feels dry/powdery, then it’s time to give it a really good watering. Garden pots that are suddenly much easier to lift or start blowing over in a brisk wind are other signs that the compost has dried out too much.

Keep weeding and clearing away dead leaves/faded stems from flower borders/ vegetable beds. Not only does this help prevent plant disease and slug damage in emerging plants, it also helps to prevent those same problems appearing much later in the growing year. Similarly, keep a close eye out for emerging weed seedlings and catch them while their root systems are easily eradicated.

Falls and the elderly: How to avoid accidents at home
4

Kathleen Watkins: ‘Occasionally I find myself talking to Gay in my head’
9