Say Slainte with a glass of surprisingly good Irish wine 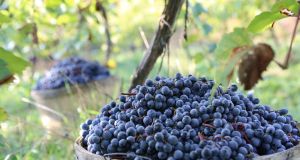 Is it possible to create a quality wine from Irish-grown grapes? While the conventional opinion is that Ireland doesn’t have the climate for it, there’s a small but growing tribe of Irish viticulturists/winemakers intent on proving otherwise, by combining the use of a handful of unusually hardy, productive, early-ripening varieties with clever cultivation techniques.

Perhaps the best known of these is the Dublin-based grower and winemaker David Llewellyn (llewellynsorchard.ie), whose tiny half-acre vineyard in Lusk is home to 500 vines.

The majority of these are a variety known as Rondo, prized by viticulturists for its ability to produce an excellent harvest of red grapes even in cool, damp climes such as ours. Llewellyn also grows small amounts of Cabernet Sauvignon and Merlot grapes (both under cover). His wines, which he calls Lusca, have impressed Irish wine critics, including John Wilson of The Irish Times, who admitted to being pleasantly surprised by their quality.

While Llewellyn has been experimenting with winemaking since the early Noughties, German-born Thomas Walk established his small, family-owned, organically-managed vineyard in Kinsale, Co Cork back in the 1980s. Again, it’s the standout variety Rondo which made this possible.

In fact, it was in his Cork vineyard that it was first planted in Ireland on a commercial basis, as part of a collaborative research project between Walk and Professor Helmut Becker of the Institute for Grape Breeding, in Gesenheim, Germany. Walk’s organic wines, which he describes as “quite unique, full-bodied reds” are only sold via his agents in Germany (see thomaswalk-vineyard.com).

Meanwhile in Co Waterford, the former restaurateur, trained sommelier and viticulturist David Dennison has also established a small, productive, commercial vineyard in his farm at Ballinboola House near Passage East.

Dennison is enthusiastic about the opportunities that hardy, productive varieties such as Rondo afford skilled Irish winemakers in terms of creating vintages of genuine quality. His two-acre vineyard, which is managed entirely organically, produces an annual harvest sufficient for the creation of up to 800 bottles of wine.

Up until now, these haven’t been offered for sale; as a trained sommelier, Dennison was determined to hold off until he was 100 per cent satisfied that the quality was sufficiently high to meet his exacting standards. But, from next year, Dennison’s Farm Wines will be appearing on the menus of a handful of top Waterford restaurants such as Bodega, Faithlegg House and The Lemon Tree, bringing the idea of seasonal, sustainable, local Irish produce to an entirely new level (see facebook.com/DennisonsFarm).