Leader of the New Perennial Movement, designer Piet Oudolf is a pioneer of the growing trend for experimental landscapes 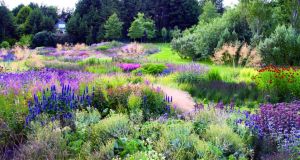 A garden in West Cork by Piet Oudolf: he also designed the High Line park in New York

[FEATDROP5]If there is a garden style that defines the opening decades of this century, it’s surely the movement towards a more naturalistic approach to planting, whose aim is the creation of a kind of reconfigured wildness that takes its inspiration from naturally occurring plant communities.

One of the people at its vanguard is Piet Oudolf, leader of the New Perennial Movement. Probably best-known for his work on New York’s High Line, the public park recently built on a 1.45-mile-long historic railway line high above the streets of Manhattan, thi[/FEATDROP5]s Dutch plantsman and designer came to prominence in the 1990s as the co-author of a series of influential and beautifully illustrated gardening books.

His richly textured, densely planted, experimental landscapes, which made use of a generous palette of then little-known perennials and grasses, inspired a new generation of designers; Chelsea gold-medal winners such as Tom Stuart-Smith, Dan Pearson and Sarah Price all cite him as an important influence as do sibling Irish gardeners June and Jimi Blake.

Even those gardeners dismissive of the naturalistic style – and there are quite a few – have surely unwittingly come under the influence of this talented Dutchman. For although there is undoubtedly a host of plant breeders, nursery owners, designers and landscape architects who have played an important role in introducing us to the sorts of plants that have quickly become firm garden favourites – astrantias, sanguisorbas, persicarias and the like – it’s arguably Oudolf who has done the most to popularise them.

Partly a call to arms to gardeners, designers and landscape architects, to explore what Kingsbury describes as a “new and immensely rich seam in planting design”, it’s also a highly practical manual that explains and illustrates in exhaustive detail the evolution of Oudolf’s complex planting techniques, from his stylised “meadow” at Bury Court, Hampshire in 1996, to his more ecologically inspired recent work.

Also included, is an Oudolf garden in West Cork, which features on the book’s cover.

In particular, Kingsbury takes an in-depth look at Oudolf’s planting plans and the different ways in which he effectively blends, layers or “intermingles” dense combinations of plants in a way that mimics the dynamism and joyful spontaneity of plant communities in the wild.

He explains Oudolf’s hierarchy of planting – the “primary” or high-impact plants chosen for colour or structure, the “visually quiet” matrix plants (often grasses) used en-masse and, finally, the “scatter” plants that create rhythm and add to that all-important sense of naturalness.

Along with a plant directory (which Kingsbury admits is biased towards plants of open, sunny conditions), there are sections on plant colour, texture, form, growth habit and seasonal change. There’s also an explanation of the importance of Oudolf’s 70 per cent rule, which relies on a ratio of seven “structure plants” (eg, Eryngium bourgatii ) to every three “filler plants” (eg, Papaver orientale) to give prolonged periods of interest.

Another chapter evaluates the long-term performance and permanence of perennial planting and is one that opponents of Oudolf’s style will find interesting, given the criticism that, while seductively beautiful, his planting schemes can be costly and difficult to maintain, especially in high-rainfall countries such as Ireland.

Kingsbury also looks at the work of some other internationally known practitioners of the naturalistic style – the British designer Dan Pearson, the Wisconsin nursery-owner Roy Diblik, German landscape architect Heiner Luz and British ecologists James Hitchmough and Nigel Dunnett of the Sheffield School, as well as the Mixed Planting Schemes devised in Germany and Switzerland.

The final chapter assesses the importance of this new planting design and its anticipated impact, not just on public and private landscapes but also on the training of horticultural and landscape professionals who, as Kingsbury puts it, “Will need a grounding in basic ecological science and an ability to use science to guide their intuition in managing complex plantings.”

The same is surely true of the home gardener keen to replicate something of Oudolf’s plant wizardry – if so, this provides an excellent starting point.

Saturday July 6th-Sunday July 7th, Baltimore Secret Garden weekend in which a host of private gardens are opening their doors to the public. There will also be a pop-up garden bookshop, vintage car rides and afternoon tea (3-6pm) in
The Glebe Café, see facebook.com/glebegardenscafe