Learn how to best grow and cultivate these exquisite spring flowers 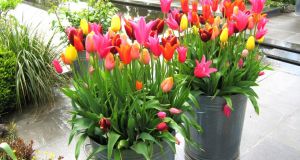 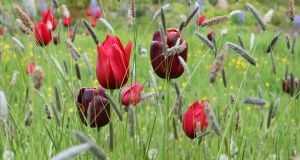 It’s the flower that was introduced into Europe by the charismatic Flemish diplomat Augier Ghislain de Busbecq, the flower that supposedly almost bankrupted the Dutch nation, and the flower to which author Michael Pollan dedicated a chapter of his book The Botany of Desire , singling it out as the bloom that most stirs and gratifies the human desire for beauty. It is, of course, the tulip.

Right now, our gardens are full of its exquisite spring flowers, while various tulip festivals/tulip days are kicking off around the country. But which cultivars are the most beautiful? And what’s the best way to grow them? When The Irish Times put these questions to some of the country’s best-known tulip lovers, this is what they had to say . . .


Angela Jupe, owner of Bellefield House and Gardens and founder of the Co Offaly-based annual tulip festival, which runs from today until May 4th, and includes the participating gardens of Woodland Cottage and Townhouse Garden in nearby Birr (angelajupe.ie)

Favourite tulip? It’s got to be ‘Cairo’ (single early), an intriguing tulip with burnt-orange/bronzed petals.
Grown in combination with? The lime-green flowers of Euphorbia ‘Excalibur’ , various paeonies including Paeony mascula and P. veitchii , and the low-growing Euphorbia cyparissias , a fantastically useful groundcover plant.
Useful tip? Always plant the bulbs deeply, a minimum of 25cm (10in). It makes them much more likely to flower year after year.
Favourite supplier? Nyssens (peternyssen.com) and Fluwel (fluwel.com). The latter also supplies fabulous colour-themed mixes and combinations of bulbs.

James Wharry , head gardener of Glenarm Castle in Co Antrim, whose eighth annual tulip festival kicks off early next month (May 3rd-5th), with a seasonal display of more than 9,000 tulips (glenarmcastle.com).

Favourite tulip? ‘World’s Favourite’ (Darwin hybrid), a tall tulip with scarlet petals edged with yellow.
Grown in combination with? We grow it in the border, next to the emerging foliage of various sedums, whose fleshy, bronze foliage make a great contrast.
Useful tip? Make sure to plant the bulbs in well-cultivated soil, and after planting, give the ground a 5cm-7.5cm (2-3in) deep mulch of very well-rotted horse manure.
Favourite supplier? Bloms Bulbs, sponsors of Glenarm Castle’s Annual Tulip Festival (blomsbulbs.eu).

Wicklow-based gardener June Blake , whose country garden is home to several thousand tulips and who is hosting a two-day tulip-festival there this weekend (April 26th-27th, see juneblake.ie)

Favourite tulip? ‘‘Ballerina’, a beautiful lily-flowered tulip with flame-orange petals and a delicious scent.
Grown in combination with? Any dark leaved rodgersia , Rodgersia pinnata ‘Perthshire Bronze’, a plant with fantastic, chocolate-coloured leaves, as well as other tulips including the lily-flowered ‘Burgundy, at a ratio of roughly five ‘Ballerina’ to one ‘Burgundy’.
Useful tip? I ignore the traditional advice, which is to scatter the bulbs and then plant them where they fall. Instead, I dig the holes first, roughly 25-30cm (10-12in) deep and about 25cm (10in) in diameter, then throw about five bulbs into each one (I don’t worry about which way-up they fall). This way, the flowers appear exactly where I want them. Rather than replacing all of the bulbs each year, I just add a certain amount of the same cultivars. The new bulbs inevitably give the biggest, tallest flowers while the older bulbs produce smaller, shorter flowers. Grown together, it gives a pleasing, natural effect.
Favourite supplier? Irish-based Beechill Bulbs (bulbs.ie).

Michael Byrne, head gardener at Powerscourt Gardens in Co Wicklow, home to more than 10,000 tulips, and whose annual tulip festival is on this month.

Favourite tulip? A fragrant, large-flowered, fiery orange-red cultivar known as ‘Holland’s Glorie’ (Darwin hybrid).
Grown in combination with? Clumps of forget-me-nots and the Kennedy Irish primrose ‘Claddagh’, which has golden flowers and chocolate-coloured foliage. Together they give a very vibrant display.
Useful tip? Don’t forget bulb size matters; they might be more expensive but the largest (12+cm) will give you the best flowers.
Favourite supplier? Irish-based Beechill Bulbs (bulbs.ie).

Favourite tulip? ‘Daydream’ (Darwin hybrid), a wonderful tulip which opens yellow and then gradually turns apricot/orange.
Grown in combination with? A mix of other mid to late-season tulips, including ‘Apricot Beauty’, ‘Ballerina’.
Useful tip: To avoid the bulbs becoming infected by the fungal disease known as tulip fire, I grow a mix of five different cultivars in large dustbins filled with a peat-based compost, replacing the peat each year. I make five large (5cm/2-in) drainage holes in the base of the bin before covering it with a 10cm/4in layer of broken crocks, and then compost.

Starting roughly 30cm/12in from the base, I’ll use 60 bulbs per bin to make three layers of bulbs, with 5cm (2in) of compost between each layer. Don’t worry about which tulips should go in which
layer. If a particular cultivar is supposed to flower in a particular month, then it will do so, regardless of how deeply you plant it. My tulip dustbins give me a fabulous display that lasts from six to eight weeks.
Favourite supplier? Mr Middleton
(mrmiddleton.com).

Consuming less, but better – the delicate balancing act of the circular economy
4