Gardens: Planting the seed for spring

While the internet offers an endless supply of seed catalogues, it is still a case of buyer beware 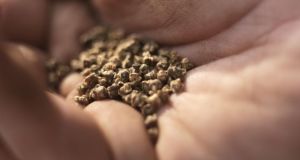 I type these words, large, fat snowflakes are fluttering icily from the sky like a scene out of Mother Goose. So, no kind of weather to garden out of doors, then, but instead the perfect day to browse through some of the world’s most alluring online seed catalogues.

In the same way that the internet has radically transformed everything from the global economy to the way in which we socially interact, so it has utterly revolutionised the ways in which gardeners can purchase seeds, enabling us to source them from halfway across the world with the simple click of a button.

Small, light, surprisingly resilient and satisfyingly cheap to buy, seeds readily lend themselves to such easy online commerce. Packaging and postage costs rarely reach alarming amounts, customs controls are not as restrictive as for living plants, while there are often bargains to be had, allowing Irish gardeners to buy from suppliers based in places as far-flung as Tasmania, South Africa and the US.

Traditional seed companies aside, increasingly there are other kinds of suppliers to choose from. This includes the growing tribe of private gardens/gardeners and independent nurseries offering small selections of home-harvested seed for sale through their own personal online shops; well-known examples include Derry Watkins’s Special Plants Nursery and Great Dixter (both in the UK).

Increasingly, home gardeners are also selling small amounts of home-harvested seed through Ebay, the online auction and shopping website. Typically the seed is of rare and unusual plants – the kinds not generally stocked by mainstream suppliers because they are too difficult to source in sufficient quantity, or because there is little demand for them, or because the skills required to bring them to germination might be beyond the average gardener.

On top of this, there’s a new breed of plant hunters helping to fund their travels by selling seed of plants collected in the wild. Again, the type of seed offered appeals to adventurous gardeners keen to get their hands on rarities or newly discovered plants. Many of these gardeners also report higher, faster rates of germination – a result of the seed being exceptionally fresh.

While the many benefits are clear, gardeners also need to be aware of some of the risks of shopping for seeds on the internet. First and foremost is that of buying a “pig-in-a-poke”. Even seasoned Irish gardeners such as Séamus O’Brien (author and head gardener at Kilmacurragh, Co Wicklow) admit to being occasionally seduced by a catalogue’s mouth-watering description of a plant, only for it to turn out to be terribly disappointing in the flesh. “You need to have a very good idea of what you are buying,” he says, “otherwise, you could end up with the dullest of dull plants.”

Other well-known Irish gardeners such as Deborah Begley, owner of Terra Nova gardens and nursery in Limerick, warn how coveted “rarities” bought as seed on the internet can sometimes turn out to be invasive. “An example is the mock strawberry, Duchesnea indica, which initially seemed to be a charming evergreen ground cover plant, but spread through the garden at horrifying speed; I’m still struggling to eradicate it.”

If that sounds unnecessarily cautious, bear in mind the fact that Japanese knotweed, Himalayan balsam and Giant hogweed (all originally introduced as ornamental garden plants during the Victorian era) are now classified as invasives in Ireland.

“I usually check the star-rating of the seller and where they are located. Then I click “contact seller” and email them directly with some query about plants, postage etc, and make my judgment based on their reply.”

Gardeners privately swapping or selling seed in this way should also be aware of the fact that if the seed hasn’t been properly cleaned or prepared before postage, it can sometimes play Trojan horse to pests and diseases. It is also worth noting that for reasons of biosecurity, EU legislation (council directive 200/29/EC) restricts the importation of seed of certain species (known as regulated products) for use by gardeners.

One bizarre example is sunflower seeds – unless you have applied for a phytosanitary certificate from the Department of Agriculture (unlikely), you are prohibited from buying these from a supplier outside the EU for sowing at home. If the customs people happen to discover such a package, there is the possibility of a hefty fine.

Similarly the new EU-approved Nagoya Protocol (a contentious issue among gardeners) aims to restrict the sale/availability of plant material collected in the wild.

In summary, it’s a case of caveat emptor or buyer beware. With that in mind, here is a list of some of the most highly regarded of the online suppliers (excluding independent Irish suppliers) specialising in the seed of unusual or rare plants, which I have either used myself, or which have been recommended by fellow Irish gardeners.

Irishwoman in New York: I didn’t fear getting Covid-19 but I should have
5

What do you do when you meet a bear on a walk? Copy this 12-year-old
7