Gardens: Plant some seeds of inspiration

Next year’s catalogues are out, and there are lots of interesting new plants to consider growing 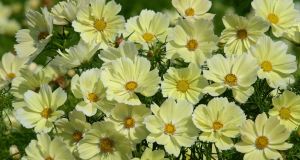 Looking forward to tomorrow’s Christmas turkey and figgy pudding? Can’t wait to finally hear some sleigh-bells in the snow, rather than the steady drumming of raindrops on the roof? Me too.

Meanwhile, in the spirit of Christmas cheer, I’d like to offer you some green-fingered inspiration for the gardening year ahead by taking a peek at what some of the very best Irish specialist nurseries and independent seed producers have added to their 2016 catalogues.

Because a brand new growing season, my friends, is only just around the corner, and I know that I’m not the only one who’s looking forward to it with as almost much excitement and anticipation as the arrival of Saint Nick himself.

Let’s start with something to tickle the interest of kitchen gardeners, which is the introduction of ‘Casablanca’, a new, high-yielding first-early variety of potato that’s been making waves on the show-benches because of its exceptionally fine flavour and versatility (unusually high levels of dry matter mean that it’s suited to both boiling and frying). Is it a case of ‘Move over ‘Orla’?’ To answer that question, you’ll need to grow it for yourself; Leitrim-based The Organic Centre will be stocking the variety as organic seed potatoes ready for planting out this coming spring.

In the meantime, get your hands on seed of Manzano chillies, a new addition to the catalogue of West Cork-based organic producer Brown Envelope Seeds. A fiery hot, truly perennial variety of chilli (Capsicum pubescens) with brilliant orange flesh and black seeds, it scores highly on the Scoville Scale (for best results, sow in late January/early February).

Madeline McKeever of Brown Envelope Seeds suggests using the fruits in a fermented salsa, which she makes by “buzzing them with some tomato and onion and coriander and a good bit of salt”.

If that wets your appetite for the exotic, then you’ll also be interested in the yacon, ulluco, mashua and oca plants that Kilkenny-based plant breeder and nurseryman Pat Fitzgerald will be launching on the Irish market this coming spring as young pot plants.

Nutritious and easy to grow, these South American food crops are becoming increasingly popular with Irish kitchen gardeners. While full details of Irish stockists have yet to be confirmed, Johnstown Garden Centre will definitely be among them.

Irish flower gardeners are equally well served by a host of exciting new additions to the catalogues of Irish specialist plant nurseries and seed suppliers.

Remember the painterly, vintage Benton irises originally bred by the late artist Cedric Morris, which created such a stir when they were exhibited at last year’s RHS Chelsea Flower Show, after being rediscovered by British gardener Sarah Cook? Now you can get your muddy mitts on them, courtesy of the Wexford-based perennial nursery, Camolin Potting Shed which will be stocking ‘Benton Nigel’ (blue/purple), ‘Benton Susan’ (buff yellow/white) and ‘Storrington’ (deep pink/plum). All enjoy a well-drained soil in full sun.

The same nursery will also have stock of the delightful Salvia ‘Love and Wishes’, another bright and beautiful star of the 2015 flower show that I’ve coveted ever since I first saw it in flower last summer.

This bee-friendly, Australian-bred perennial produces dark-stemmed spikes of purple-calyced, deep-pink flowers from June to November and is also happiest in full sun.

Oliver Schurmann of Mount Venus Nursery singles out Coreopsis ‘Full Moon’ as his favourite addition to the Dublin-based nursery’s 2016 catalogue.

One of the much-lauded Big Bang series of coreopsis from American plant breeder Darrell Probst, the man credited with revolutionising this sun-loving genus, this hardy, vigorous, floriferous perennial produces its large canary-yellow blooms from mid-summer until the first harsh frosts and is also an excellent cut-flower.

“I got it from Carl Wright of Caher Bridge Gardens and I think it’s one of the very best early flowering perennials for damp shade.”

These are just some of the newest offerings that might tickle your horticultural fancy. For a more comprehensive list of Irish specialist nurseries, some of which offer their catalogues as PDFs that can be downloaded directly from their websites, take a look at isna.ie, the website of the Irish Specialist Nurseries Association.

Two great, all-purpose wines from Burgundy for under €10
9