After 45 years in her Ranalegh show garden, the celebrated TV gardener started from scratch at nearly 80, in a walled garden that's now open to the public

One of Ireland's best known gardeners Helen Dillon recently moved from Ranelagh in Dublin to Monkstown where she has created a brand new garden. Here she picks her five favourite plants. Video: Bryan O'Brien 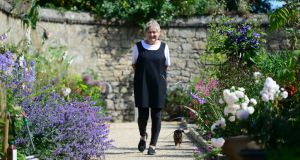 When Helen Dillon and her husband, antiques specialist Val Dillon, announced in 2016 that they were putting their Ranelagh home up for sale, many hearts skipped a beat. For anyone who had ever visited it, 45 Sandford Terrace represented the very best of Irish gardening, a sort of botanical Shangri-La where the plants – so many glorious plants – were somehow always at their most beauteous.

The product of 45 years of expert plantsmanship, artful design, consummate horticultural skill and tender loving care, people wondered if they would ever see its kind again. And what of Helen Dillon herself? Would the woman celebrated both here and abroad for her green-fingered flair ever again make a garden that would be open to the public?

Fast forward to June 2018, and before visitors so much as walk through the gate of the Dillon’s new seaside home in Seafield Avenue, Monkstown, Dublin, the glorious froth of plants growing along the sun-filled laneway outside the narrow entrance give a very clear clue as to the horticultural prowess of its owners.

As for the garden and the house itself – a once-humble 1960s-style bungalow elegantly modernised for the couple by architect Michael Kelly – both are tantalisingly hidden from public view behind high, old walls of golden-grey granite.  Those same walls, which date back to the early 19th-century and the garden’s days as an orchard for a neighbouring property, enclose the site on all sides, and were one of the things that first drew the Dillons’ interest.

“Not the house,” laughs Helen. “Val always vowed that he’d never live in a bungalow. But the loveliness of the site – and those walls – eventually won him over. Plus Michael did such a great job with the building.”

It’s those handsome granite walls that define the tranquil, cloistered, almost monastic ambience of the Dillons’ new town garden as well as the sleekly angular lines of its beds and paths. They also shelter it from the salty sea breezes blowing in off the nearby Irish sea (just a little more than a stone’s throw away) and provide support and the perfect backdrop for the myriad of ornamental climbers and shrubs planted by Helen over the last year.

There are tree ferns. Spiky agaves. Tall pillars of the pale pink rose “Pierre de Ronsard” (“‘an extravagance”, says Helen, “but we needed that instant height”) and the extraordinary silver ruffles of Senecio candicans “Angel Wings”. The Chinese yellow banana (Musa lasiocarpo, which Helen prizes for its wind-resistant leaves) and angel’s fishing rods (Dierama) in shades of plum and mauve. Drifts of alliums too, with their purple drumstick flowers, and rusty-coloured Rodgersia “Perthshire Bronze”, a prized plant that Helen first brought to Ireland many years ago from her Scottish childhood home.

There are rarities such as the strangely beautiful Marlborough rock daisy, a low-growing coastal plant native to New Zealand with silver-white flower buds, and even Helen’s favourite lady’s slipper orchid. Some came with the couple from Sandford Terrace as rooted cuttings or “slips” or divisions, while many others are new purchases.

As for Helen herself, as a woman who has gardened all her life she could be excused for having developed an occasionally blasé attitude to the sight of a climbing rose in bonny bloom or a clematis bursting into bud. But not a bit of it. Instead she’s giddy with the joy and excitement of cajoling a beautiful new garden into existence, as well as the opportunities it provides for experimenting with a host of new plants.

“When we were leaving Sandford Terrace people kept asking us if we would miss the garden terribly. It was almost as if there was this expectation that we would inevitably regret our decision to sell up. But we don’t. Not for a moment.

“I never had children but it’s a little like being expected to wipe your children’s bottoms for the rest of their lives. Time moves on. The truth is that there was no space left for me to play with plants at Sandford Terrace, while the old garden had been gardened for so very long that the soil was beginning to lose its guts.”

There’s no chance of their new garden losing its guts any time soon. Helen and Val made sure of that before so much as a single plant went into it by insisting on the soil being removed to a depth of 45cm and replaced with virgin soil from a field in north Co Dublin. It’s a very different beast from the light, porous, ultra-free-draining soil of their old garden. “Heavier, but very fertile and much more moisture-retentive.”

They also removed all of the Monkstown garden’s existing planting when they moved so that they could start with a completely clean palette. As for the new garden’s microclimate, Helen describes it as “milder, brighter, windier… different but definitely better”.

“Downsizing” is a word often used to describe the move from a large family home to a more manageable-sized property better suited to a retired couple, but it’s not one that sits well with the Dillons. “I hate the term”, snorts Helen, who will be 80 next year. “We don’t see it as downsizing but as moving on.”

Nor is downsizing an appropriate description of their new garden. Yes, it’s considerably smaller than that of Sandford Terrace, but it’s by no means small (a little less than a fifth of an acre) nor has it – perish the thought – been designed with low-maintenance in mind. Instead it bears all the hallmarks of its owners’ lifelong passion for gardening.

So along with all that extravagant beauty are the important nuts and bolts of a large working garden. This includes two glasshouses, already filled to bursting point with a host of young and tender plants. There’s also a large compost heap and a manure pile discreetly hidden from public view behind wooden gates painted a delicate shade of pale grey-green, (Farrow & Ball’s “Vert de Terre”). Space has even been found for the couple’s beloved outdoor aviary – also a feature of their old garden – so that the liquid trill of canaries fills the air.

“When we first started planting the garden last year, I said to Julie [Val’s niece, who helped the couple tend their old garden and continues to do so at Monkstown] that we needed to find what I call ‘good plants for bad places’, those tricky spots in almost every garden where very little will happily grow because it’s too dry or too cold or too dark or whatever, and so you need plants that will grow on the smell of an oily rag. But we gradually realised that there are no bad places in this garden.”

Was it worth it all in the end, I ask them, given the undoubted stress of the move and the multitude of difficult decisions and pressures that inevitably came with it, from selling off furniture unsuitable for their new home to living in a hotel for months until the building works were completed?  Their answer is quick, emphatic and in unison. “Yes. Without a doubt.”

“The only thing I miss in the new garden is water,” adds Helen (their old garden was famed for its large, formal water feature) as she strolls over to the large glass doors overlooking their elegant sunny terrace to contemplate the view. “But you know, I think we might be able to squeeze that in somewhere. We just need to find the perfect spot…”

‘Stick your vaccine up your arse’ – the Covid-19 vaccine, the science and the sceptics
9