‘Shakespeare of gardening’ left an enduring legacy in British landscape 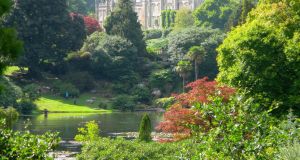 He is said to be to landscaping what Turner is to painting, and Wordsworth to poetry. And the legacy of Lancelot “Capability” Brown remains for all to see in immense parkland and gardens. His designs changed the face of the 18th century British landscape, creating rolling parkland, flowing rivers and serpentine lakes.

Brown was considered by some to be a genius, and by others as a destructive force, as he swept away formal knot gardens and parterres to make way for more natural landscapes. His nickname of “Capability” is thought to have come from his describing landscapes as having “great capabilities”.

During his 32-year career, he shaped more than 170 estates.

Born in 1716, one of six children to a yeoman farmer in Northumberland, Brown’s daily walk to school across the Wallington estate may have inspired his naturalistic designs.

He began work as a gardener at the country house of Kirkharle before going to Stowe in Buckinghamshire,where he took responsibility for architectural and landscaping works in the garden. In 1764, he was appointed King George III’s master gardener at Hampton Court Palace.

His revolutionary ideas were taken up by other designers, and it wasn’t too long before great Scottish houses and castles became surrounded by the parkland and naturalistic planting schemes that typify the period.

Brown’s style was derived from the practical principles of comfort and elegance: everything should work and a landscape should provide for every need of the great house, as well as cohere and look elegant. While his designs have great variety, they also appear seamless, owing to his use of the sunken fence or “ha-ha” to trick the eye into believing that different pieces of parkland, though managed and stocked quite differently, were one.

Toby Buckland, horticulturist, writer and TV presenter, says: “At Bowood, Wiltshire, “Capability’”planted belts of trees as his picture frame and streams expanded into a serpentine lake as a focal point. It’s masterful, magical and a wonderful place to be. No wonder his work has stood the test of time.”

Dr Sarah Rutherford, author of Capability Brown And His Landscape Gardens, adds: “Brown was the genius who could see instantly the ‘capabilities’ of a site to become a landscape work of art . . . He was the Shakespeare of gardening. His talent was reflected in his client list, which included the king, six prime ministers and half the House of Lords.”