‘Mara des Bois’ is a French variety of strawberry with a remarkable flavour, but it’s tricky to obtain and to grow. Here are some tips ... 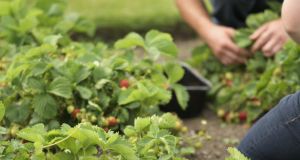 I picked my first ripe strawberry from the garden late last week; scarlet-red and succulent, its sweet flesh smelled of summer and tasted something like the wild strawberries that my siblings and I used to pick from the hedgerows as children dawdling lazily back from school. That’s because the particular variety is a “perpetual” or “remontant” type (more about this later) known as Mara des Bois. It was bred by the famous French nurseryman Jacques Marionnet more than 20 years ago using four other older varieties – Gento, Redgauntlet, Ostara and Korona – as parents.

Marionnet’s ambition was to produce a variety of strawberry that retained the intense flavour and fragrance of the woodland strawberry, an elusive quality missing from many modern varieties. He succeeded wonderfully. Such is its scrumptiousness that this French variety is prized by chefs the world over, including the Michelin-starred Martijn Kajuiter of the Cliff House Hotel in Co Waterford, who first told me about its remarkable flavour.

All of which makes it odd that it’s so hard to get hold of the plants. I searched high and low for an Irish stockist before ordering several dozen Mara des Bois coldstored runners from the excellent English nursery Ken Muir (kenmuir.co.uk) a couple of years ago. They arrived box-fresh on a late spring day and, after a quick soaking, went straight into a raised bed that I’d made sure to weed, dig, manure and then rake to a fine tilth. That might sound unduly fussy but the truth is that, with the exception of the Alpine types, the strawberry is a fussy plant that prefers full sun, protection from strong winds, and a fertile, moist but free-draining soil (ideally very slightly acid). Too dry and the plants grow and crop poorly, too wet and they succumb to any one of a variety of soil-borne diseases. Planting depth is also crucial – place the crowns too deeply or not deep enough and they will fail to establish.

For ease of maintenance, mine were planted at 12-inch intervals in rows two feet apart, just wide enough to comfortably hoe away any weed seedlings without damaging the plants. To encourage strong plants and a well-established root system, in their first year I also nipped out any “runners” that started to appear. More properly known as stolons, these self-rooting shoelace-like growths are produced by the parent plant in spring/summer and, if left to their own devices, will quickly produce another young strawberry plant. The trick is not only to prevent the parent plant from producing runners until it’s properly well-established, but also to prevent them from being produced in such abundance that they reduce the quality of the fruit. Allow no more than three or four per well-established plant, weaving them back close to the parents to produce what’s known as a matted row.

The other trick for ensuring a good crop of strawberries is to give the plants a good potash-rich feed in February, which encourages the formation of flowers. When late May frosts threatened to damage the young blossoms (no blossoms, no fruit) I also remembered – just in time – to cover them with a layer of garden fleece.

The result is healthy plants so heavily laden with fruit that we’ll soon be eating them by the bowlful. But that’s only if the slugs or the birds don’t get them first. To stop rapacious blackbirds in their tracks, I’ve draped a curtain of garden netting over the ripening fruit (for supports, I use makeshift hoops fashioned from lengths of flexible plastic piping).

As for any hungry gastropods, a couple of handfuls of Ferromol slug pellets sprinkled around the plants should stave them off.

As mentioned earlier, Mara des Bois is a perpetual/remontant variety, which means that instead of producing a single large flush of fruit like traditional summer fruiting strawberries do, it instead crops intermittently from July until mid-September, with a peak in August. Its fruit doesn’t store well and so must be eaten when freshly picked. True strawberry lovers can extend the season by growing earlier varieties such as Gariguette and Sonata, both of which will also do well in pots.

Also well worth growing is the alpine-type strawberry, whose tiny, flavoursome fruits are produced throughout the summer and which make such a pretty addition to a summer punch bowl or pudding. Better still, it’s tolerant of light shade and will happily self-seed once established. Seed of the well-regarded variety Ruegen variety is available from Chiltern Seeds (chilternseeds.co.uk).

Top tips
Coldstored Mara des Bois runners
can be planted up until the end of July but in the following weeks it’s important to nip out any flowerbuds or runners to allow young plants to establish. Never plant strawberries into a bed where you’ve previously grown potatoes, as this increases the risk of verticillium wilt, a disease that can seriously affect/kill strawberries. Plants should be replaced after three years.