What it went for: auction and fair results 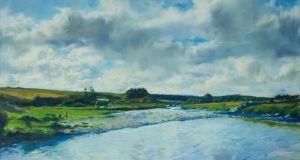 RJ Keighery Auctioneers, City Auction Rooms, Waterford. Antiques and art auction at 10.30am. Lots include Liffey, Up Stream (pictured above), an oil on canvas by Thomas Ryan (estimate: €5,000-€7,000).

Auction of the stock of Delvin Farm Country Antiques, which is closing down, on the premises at Gormanston, Co Meath, hosted by auctioneer Victor Mee, starting at 12 noon. About 1,400 lots are due to be auctioned, including antique Irish pine furniture, garden furniture, stone troughs, millstones and “19th century Irish hedge chairs, rush lights and grissets”.

Antiques, art & vintage fair at the Royal Marine Hotel in Dún Laoghaire, Co Dublin, from 11am until 6pm.

Living on the edge: endless sea views in Skerries for €950k
9