The ‘lost’ Caravaggio, and the Irish woman who bought it 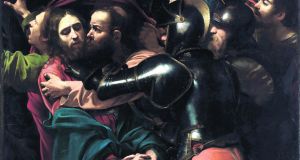 ‘The Taking of Christ’ by Michelangelo MerisiCaravaggio (1602). Photograph courtesy of the National Gallery of Ireland and the Jesuit Community, Leeson Street, Dublin who acknowledge the generosity of the late Dr Marie Lea-Wilson 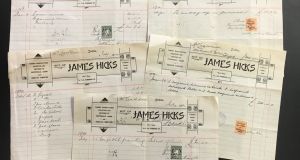 Receipt from James Hicks on Lower Pembroke Street, who repaired the painting 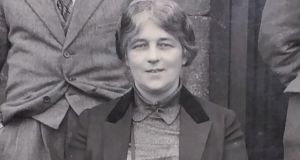 Dr Marie Monica Lea-Wilson, who bought the painting then entitled ‘The Betrayal of Christ’ in Scotland in 1921, the year after her husband’s death. In the early 1930s she gave it to a Jesuit priest 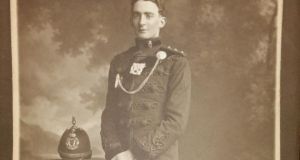 Capt Percival Lea-Wilson of the Royal Irish Rifles, who was assassinated in 1920 in revenge for his role in suppressing the 1916 Rising in Dublin

One of the most interesting items consigned to Fonsie Mealy Auctioneers’ big “history” sale in Dublin next month, on the eve of the actual centenary of the Easter Rising (April 23rd), is an archive relating not to the Rising but to Marie Lea-Wilson who lived in Gorey, Co Wexford, and died in 1971.

Hers is not a household name, but ought to be because it is thanks to her that the National Gallery of Ireland now has a painting by Caravaggio.

Born Marie Monica Ryan in Charleville, Co Cork, in 1887. she was a Catholic and, despite family objections, in January 1914 married Percival Lea-Wilson, a Protestant Londoner who had moved to Ireland and become a policeman with the Royal Irish Constabulary (RIC).

When the first World War began later that year he joined the Royal Irish Rifles, was dispatched to France and was appointed Capt Lea-Wilson.

During the 1916 Rising, Capt Lea-Wilson – on leave from the Western Front and on duty in Dublin – reputedly “abused and humiliated republican prisoners” in his charge at Rotunda Gardens.

In 1917 he was appointed district inspector with the RIC in Gorey. Revenge followed some years later when, on the orders of Michael Collins, Capt Lea-Wilson was assassinated on a Gorey street by the IRA.

His grief-stricken widow commissioned a stained glass window by Harry Clarke for the Church of Ireland church in Gorey to commemorate her husband. She later went on to become a doctor – and, although a Catholic, trained in the Trinity College school of medicine and graduated in 1928. She joined the staff of Sir Patrick Dun’s Hospital and became a well-known paediatrician. But she has earned a place in modern Irish history for another reason. In 1921, a year after her husband was killed, she went to Scotland on holidays and while there bought a religious painting in an estate sale. It is not known how much she paid.

The painting, then entitled The Betrayal of Christ, was believed to be by Gerard Von Honthorst, an early 17th century Dutch artist who was famous for his paintings in the style of Caravaggio, the celebrated Italian artist. The painting had originally been owned by the wealthy Roman Mattei family but was acquired by Scottish art collector William Hamilton Nisbet during a “Grand Tour” of Italy in the early 19th century.

Dr Lea-Wilson brought the painting home to Ireland, and in 1924 she sent it to cabinetmakers and furniture restorers James Hicks in Dublin’s Lower Pembroke Street for repairs, possibly to the frame. The archive in Fonsie Mealy’s auction contains a receipt for this work – “1 large oil painting (Betrayal of Christ)” for pounds 20”– of the actual receipt

In the early 1930s, and by now Dr Lea-Wilson, she gave the painting as a gift to a Jesuit priest, Fr Thomas Finlay SJ, in gratitude for his friendship after the murder of her husband in 1920. Fr Finlay was living in the Jesuit House of Writers at Lower Leeson Street, and the painting was hung opposite the fireplace in the dining room.

In 1990, the Jesuits asked Sergio Benedetti – an Italian conservator at the National Gallery of Ireland – to assess some of their paintings with an eye to restoration. And the rest really is history.

After The Betrayal of Christ was cleaned, and following painstaking research led by Benedetti, the painting was revealed, to an astounded art world, to be the “lost” Caravaggio entitled The Taking of Christ. It was given to the Irish State on “indefinite loan’ by the Jesuits and unveiled to the public in the National Gallery of Ireland in 1993.

Sadly, Dr Lea-Wilson had died in Dublin in 1971, aged 84, two decades before this wonderful discovery. She was buried in Deansgrange Cemetery.

Her husband, who had predeceased her by more than 50 years, had been buried, according to her wishes at the time, in his father’s grave in Putney Vale Cemetery in London where a plaque records that he was “assassinated in Gorey, Co Wexford, Ireland 15th June 1920 aged 33” .

George F Mealy said the archive of personal belongings, letters, photographs and other memorabilia of Dr Marie Lea-Wilson and Captain Percival Lea-Wilson also includes “his RIC helmet”as seen in the photograph of him in the archive.

The Lea-Wilson archive will go on public view from Wednesday, April 20th, at the Gresham Hotel on O’Connell Street, where the auction will take place on Saturday, April 23rd, at 10.30am. See fonsiemealy.ie