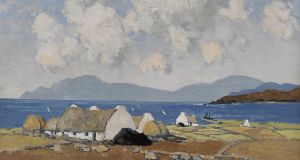 A Sunny Day, Connemara by Paul Henry achieved €420,000 through Whyte’s this week, setting a world record for the artist.

Last March many auctioneers cancelled sales due to uncertainties the industry faced from the emerging global pandemic.

For this lockdown, some sales have been postponed but only by a few weeks as new confidence has been gleaned from the learning curve of the past six months.

The pandemic forced all auctioneers to turn to online sales – some for the first time. But this shake-up and move to the internet has opened up a glut of international buyers, bringing in good results for the industry overall.

But what is astonishing is the fact the sale was conducted via telephone bid and the buyer never viewed the painting.

Though many photographs were sent in advance to interested parties, the fact the sale was virtual is good news. The Irish auction industry can extend its global reach with high-value items.

Oliver Usher, the Kells-based auctioneer admits he was “pushed kicking and screaming” into online sales as it broke the traditional way the oldest auction house in Co Meath conducted business.

His sale on September 27th was his first venture online and it yielded some good results: “The odd thing was a lot of people who called with queries did not end up buying at all. And the strangest enquiry we got was from a woman asking if a certain table had woodworm – but the thing was made entirely of metal.”

With a new-found faith in online platforms, Usher is going ahead with his sale on November 2nd of four house clearances as he “hasn’t an inch of space left” in his 6,000sq ft showroom. Highlights include a large carpet from the K Club, pine dressers and antique rosewood dining chairs.

Laois-based auctioneer Sean Eacrett has moved his Vikings sale from October 29th to November 7th, when more than 1,000 lots from the eponymous television series will go under an online hammer.

“We put it back to give people a chance to get used to lockdown again and it also helps sales when the catalogues are online for longer,” he says.

“Our last auction of the contents of the foyer of a London hotel had an 84 percent sale rate – a figure we had not seen in over a decade – and the Badlands sale [from the television series] was phenomenal as it sold 100 per cent.”

An indication to buyer interest from overseas was one Lithuanian man who spent €60,000.

“We shipped two 40ft containers of stuff from the sale to Lithuania, where the buyer has a medieval castle,” says Eacrett. seaneacrettantiques.ieWhile Adam’s has postponed its mid-century modern sale by a few weeks, as has Woodwards in Cork and Whyte’s in Dublin, the sector of the industry that appears to have been hit the hardest is Hibernian Antique Fairs.

The fairs have been run for the last 30 years by Robin O’Donnell, who represents 150 dealers all over the country. Held from Belfast to Cork, they’re “like Duffy’s Circus: we arrive in a town or city for a weekend, pitch our tent in a nice hotel and move on,” he says.

“A pain in the neck” is how O’Donnell describes the past seven months since his last fair which was held in late February. “We missed over 16 fairs and I knew we had to do something before I went insane,” he says.

Embracing an online platform for the first time in his 35-year career, O’Donnell established a virtual fair in late September: “I got our dealers to email photographs and we sent this out to our database of 10,000 customers and 5,500 Facebook followers.”

“The site nearly went into meltdown. The guy who monitors the traffic showed me the stats. We sent the mail on a Friday and by Saturday we had 30,000 impressions with a further 9,640 on the Sunday. In my expectations I thought we’d get about 2,000 if we were lucky.”

More importantly, the feedback from the dealers has been great. O’Donnell will hold his next virtual Christmas Fair on November 7th and 8th, where buyers can purchase everything from china and jewellery to furniture and collectables with prices from €10–€30,000. To sign up for fair notifications send an email to robinodon@gmail.com

It is clear that while the country may be closed, the Irish auction industry is certainly open for business.