Sheppard’s returns to base after series of off-site auctions 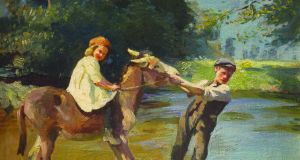 Taking the Donkey Through the Water, by English artist Harold Harvey, depicts an idyllic countryside scene, and is estimated at €8,000-€12,000. 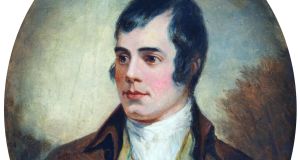 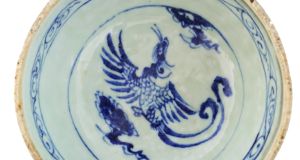 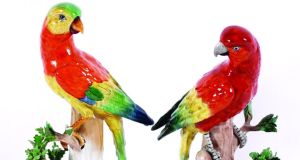 Sheppard’s saleroom in Durrow, Co Laois has been unusually quiet for the past six months as the auctioneers held two major sales off-site – first at Coolattin House in Co Wicklow and then, in September, at Loughton House in Co Offaly. But it’s back to base for the big winter auction this week. Viewing gets underway today, Saturday, November 26th for the two-day ‘Dublin & Provincial’ auction, featuring items from “town and country houses” on Tuesday and Wednesday (November 29th-30th) . The catalogue, starting with Persian carpets and ending with wine, has lots in all price ranges. The highest estimates (€15,000-€25,000 each) are for two lots of furniture: Lot 1093, a 19th-century Killarney-ware davenport (desk); and, Lot 1103, a pair of George III period console tables.

Among the curiosities in the sale is Lot 671, the camera script for This Is your Life, featuring Terry Wogan, made by Thames Television in London in 1978 and signed by Wogan (€250-€350); and Lot 284, a leather-bound notebook in an Asprey box, “to commemorate the 15th anniversary of Couture Marketing Ltd 1974-1989” and signed by Sarah, Duchess of York on May 2nd, 1989. Poor Fergie, banished to the bargain basement – but with an estimate of only €30-€50 a steal for collectors of royal autographs.

Sheppard’s has published a separate catalogue for a “Classic Art Evening Auction” featuring Irish and international paintings on Thursday (December 1st) in the saleroom in Durrow at 7pm.

In between, other interesting pictures include: Lot 1535, Taking the Donkey Through the Water, by English artist Harold Harvey, depicts an idyllic countryside scene, and is estimated at €8,000-€12,000. The painting is dated 1914 – evoking the last summer of the Age of Innocence, unknowingly on the eve of destruction in the Great War.

There are three very large paintings from a private collection in Co Tipperary by the English artist Claude Francis Barry (1883-1970), each measuring approximately 6ft by 7ft ,which would suit a large public space such as a hotel lobby. Each is being sold separately. Lot 1551, A Sunlit River Landscape with Sheep in the Foreground; Lot 1552, Riverscape with Trees and Figures in the Foreground; and Lot 1553, A Nocturnal Lake Scene are each estimated at €8,000-€12,000.

Lot 1541, a 17th-century Dutch School Dutch Townscape at Night with Figures in Oriental Costume and an Elephant, estimated at €4,000-€6,000, is an oil-on-oak panel, measuring approximately 7 by 5 inches, that depicts “the elephant Hansken about to be presented to the Prince of Orange by the Directors of the east India Company”.

Both auctions will be broadcast live online and the catalogues can be viewed at sheppards.ie. Viewing for both begins at 10am this morning in the saleroom in Durrow, Co Laois.