Review of 2016: rising prices but no revolution in Irish art market

Orpen, Yeats, Henry and Scully continue to dominate with Flatley getting a foothold 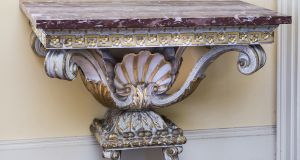 One of a pair of 18th-century marble-top console tables owned by Sir Anthony O’Reilly. They sold for €145,000 – 10 times the estimate – achieving the highest price for antique furniture at auction in 2016 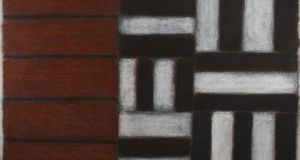 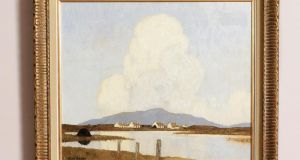 Evening in Achill by Paul Henry, which sold for €135,000 at Morgan O’Driscoll

The post-crash recovery in the Irish market for art, antiques and collectables continued in 2016 with many auction houses reporting an increase in business and strong demand.

In the art market paintings by Paul Henry and Jack B Yeats maintained their timeless appeal; in antiques, Chinese items, again, proved to be the most lucrative; and collectibles were dominated by demand, albeit patchy, for 1916 Rising-related memorabilia.

The power of good provenance to attract strong bidding was demonstrated repeatedly, most notably in the sale of items owned by Sir Anthony O’Reilly at Mealy’s and those of the late Dublin collector Dr Bryan Alton at Adam’s.

Here seven major auction houses look back on the year.

deVeres capped its “most successful year in many years” with the highest price for art at auction in Ireland in 2016 achieved for 1.6.92 – a pastel by the Dublin-born artist Sean Scully which sold for €165,000 in November.

The auction house based in Kildare Street, Dublin , said: “The Irish art market is healthy and competitive, particularly at the mid to upper end” and that “supply to the market improved in 2016”. It said: “While there are increasing numbers of new buyers entering the market” there had also been “a return to the auction room of private clients from past years”. It also noted “the contemporary [art] market was re-energised this year”.

Ian Whyte, managing director of Whyte’s auctioneers in Dublin’s Molesworth Street, said 2016 was its “best year since 2008, mainly due to an increase in good consignments” including the art collection of the late George and Maura McClelland. But striking a note of caution, Mr Whyte said: “Since the Brexit vote we have lost a considerable amount of business from the UK. Some of this is down to the currency fluctuations but also, especially in Northern Ireland, a renewed lack of confidence due to the economic uncertainty it will bring to the six counties. On the other hand, the strengthening of the US dollar has brought some welcome improvement in transatlantic business.”

He said “the commemoration of the 1916 Rising aided sales of historical collectibles, and there was continued demand for scarce militaria, medals, coins and banknotes” and that the forthcoming centenary commemoration of the War of Independence would attract more collectors in the next few years.

At Adam’s in St Stephen’s Green, managing director James O’Halloran described the Irish art market in 2016 as “steady – with demand for blue-chip artists being maintained”. He saw “an increased supply of good quality works coming on the market after a couple of years of diminished supply”.

He said it was “great to see younger purchasers entering the auction scene as well as foreign-based buyers”. While they “demand good value and generally have firm, set-price thresholds”, he said, “when fresh- to-the- market pieces appear they do tend to attract extra interest and price then tends not to be so rigid”. Apart from paintings by traditional names such as William Orpen, Yeats and Henry, Mr O’Halloran said that demand for modern and contemporary art was “performing” and “the future is looking bright for the new generation of Irish artists”.

Mealy’s said it had seen “a bull market across all asset classes from porcelain to silver, and furniture to paintings and that confidence has returned on both the buyers’ and sellers’ side of the market”. Mealy’s held two house contents auctions – Lotabeg House on the outskirts of Cork and Kilfane House, Thomastown, Co Kilkenny – that were the best-attended sales of the year and each attracted crowds of 7,000 to the viewings.

Although Kilfane House was arranged for the American owners of the house, their contents were overshadowed by items consigned from Castlemartin House in Co Kildare, the former home of Sir Anthony O’Reilly, by officials acting on the instructions of the Supreme Court in the Bahamas where he was declared bankrupt in 2015. A pair of 18th-century marble-top console tables from Castlemartin sold for €145,000 – 10 times the estimate – and it was the highest price paid for antique furniture at auction in Ireland in 2016.

Sheppard’s experienced “exponential” growth in online bidding and, not for the first time, the company scored a major coup with Chinese antiques when, in June, a Qing period vase sold for €260,000 – more than three times the top estimate. The vase was bought by an online bidder in Beijing. The company spent much of the year away from its Durrow, Co Laois, saleroom and attracted thousands of people to country house auctions – most notably a marathon four-day auction of the contents of Loughton House in Co Offaly, owned by former deputy leader and minister for health, for Fine Gael, and now Senator, Dr James Reilly. Among the lots were Dr Reilly’s cars including an “ox-blood Daimler, registered to the British Admiralty in 1939 when Churchill was First Lord of the Admiralty” that sold for just €12,500 and no fewer than 10 vintage Jaguars.

Skibbereen, Co Cork-based auctioneer Morgan O’Driscoll said “2016 has proved to be the most successful year since the company was set up in 1994”. Thousands of works of art went under the hammer in a series of 13 auctions – two “in-room” and 11 online – the most held by any art auction house in Ireland.

The company’s practice of holding pre-auction viewings in London– the only Irish auction house to do so – appears to be paying off. Mr O’Driscoll said “approximately 30 per cent of all sales went to clients outside Ireland” with bidders from over 40 countries.

The highest price achieved at a Morgan O’Driscoll auction was €135,000 for the Paul Henry painting Evening in Achill. But an indicator of how the Irish art market is changing was evidenced by the relative newcomer to visual art, Michael Flatley, having no fewer than two paintings among the 10 top prices achieved at the auction house.

Fonsie Mealy Auctioneers saw “increased interest in all sectors of the business” and “while prices are still not up to past levels, auctions are again much busier, and people are realising that anything good, anything of quality, particularly with a provenance, is a sound and enjoyable investment, when compared to money in the bank”.

While a number of auction houses held sales of 1916 memorabilia, the company stole a march on rivals by holding its sale on April 23rd – the eve of the anniversary of the Rising – in the Gresham Hotel opposite the GPO in Dublin. Among the items sold was an original copy of the 1916 Proclamation that made €150,000; and keys reputedly found in the burnt-out GPO after the Rising, that made €3,400.

Top 10 paintings sold at auction in Ireland in 2016