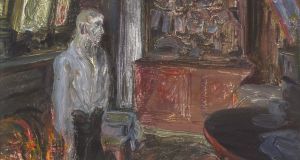 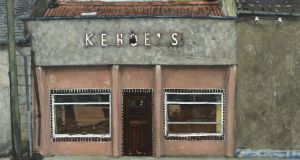 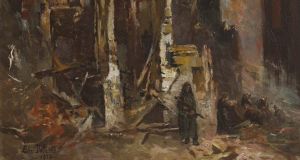 Anyone attending the election count at the RDS in Dublin today and in need of a break from proceedings could pop next door (via the Anglesea Road entrance) to see an exhibition of Irish art by Whyte’s auctioneers. The paintings on view will be auctioned on Monday evening. The highlight is a Jack B Yeats painting, The Quay Worker’s Home, described as “a remarkably poignant and rare depiction of urban life in 1920s Ireland”, estimated at €60,000-€80,000.

The painting was formerly in the collection of the McAlpine family, who owned one of Britain’s biggest construction companies. It employed thousands of emigrant Irishmen in Britain in the mid-20th century, who were McAlpine’s Fusilers in the song made famous by the Dubliners.

The painting has often been loaned for exhibitions in Dublin and other cities during the past 50 years. It was first seen in public in Dublin in 1927, when it was exhibited among new paintings by Yeats. It was sold by art dealer Victor Waddington to the McAlpine family.

In a catalogue note for the auction, Dr Róisín Kennedy, an expert on Yeats, said “the deep empathy that Yeats felt towards the plight of working men and women is evident in this painting. It is a remarkably poignant and rare depiction of urban life in 1920s Ireland.”

The Quay Worker’s Home depicts a man standing in the dim interior of his modest home, warming his hands by the fire, with his back to the mantelpiece. A brown-painted dresser stacked with delph dominates the back wall. Beside the man stands a low bench with a basin full of water, which he presumably used to wash himself after returning from work.

Other highlights in the sale include Patrick Hennessy’s dramatic The Wild Ponies of Connemara, estimated at €8,000-€10,000. Whyte’s said: “Hennessy will be the subject of a major exhibition at Imma this spring; a fact that won’t go unnoticed by the astute buyer.”

An oil on canvas titled Henry Street, Dublin, During the 1916 Rising by Edmond Delrenne is estimated at €8,000-€10,000. Delrenne was, apparently, the only artist on the streets of Dublin during the Rising. “This is an extremely rare contemporaneous painting of Dublin in the immediate aftermath of the Rising,” according to Adelle Hughes at Whyte’s. “Nelson’s Column on O’Connell Street, as Sackville Street was renamed, . . . is clearly visible.” She said “Delrenne was a Belgian refugee who seems to have arrived in Dublin circa 1914 and remained here throughout the first World War.” He painted images of Dublin in the aftermath of the Rising. His best- known work is a watercolour, Sackville Street in Ruins, 1916, which is in the collection of the National Gallery of Ireland and is depicted on the cover of the gallery’s 2016 calendar.

A set of drawings by Thomas Ryan, a well-known history painter and former president of the RHA, depicting the seven signatories of the Proclamation and entitled 1916 Rising Leaders is estimated at €8,000-€12,000.

An oil-on-canvas entitled The Resurgent Spirit by Brett McEntagart, estimated at €3,000-4,000, dates from 1966 and was exhibited in Dublin during events to mark the 50th anniversary of the Rising. Whyte’s Irish & International Art auction will take place at the RDS, Ballsbridge, on Monday, February 29th, at 6pm. Viewing today, tomorrow and Monday, February 27th-29th, 10am-6pm. See whytes.ie

Róisín Ingle: The resilience of my children has taken my breath away
7