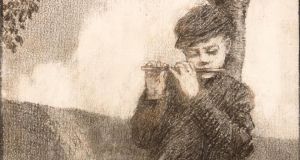 Detail from ‘Boy with Flute’ by Paul Henry 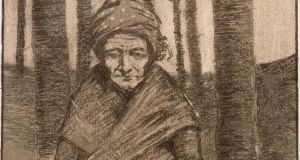 Detail from ‘Woman With Fagots’ by Paul Henry

Two drawings by artist Paul Henry – one previously unknown – which have been in a private collection in New Zealand for over 70 years have been returned to Ireland and will be sold at auction in Dublin.

Co Cork-based art auctioneer Morgan O’Driscoll said the charcoal drawings had been acquired directly from the artist in the early 20th century and were taken to Auckland in the 1940s.

The pair will be auctioned separately in his Irish & International Art Auction in the RDS on September 14th. They are on view to the public in O’Driscoll’s Skibbereen gallery this weekend and will go on view in the RDS ahead of the auction from Friday afternoon, September 11th. Each is estimated at €15,000-€25,000.

Belfast-born Paul Henry (1877-1958) was one of Ireland’s best known and most popular artists. He spent many years in Achill (between 1910 and 1920) and is renowned for his west of Ireland landscape paintings. In May 2013, Adam’s in Dublin achieved a world record price for a painting by Henry when Potato Gatherers sold for €400,000.

According to catalogue notes provided by Henry expert S.B Kennedy for the Morgan O’Driscoll auction, the drawings pre-date Henry’s Achill period. The previously unknown Boy With Flute – charcoal on paper, signed lower right, 52cm by 28½cm – “was probably made around the spring of 1910. The setting is almost certainly Surrey, where Henry lived from the autumn of 1903 until the summer of 1910 before he left London for Achill Island”.

Mr Kennedy, who is the author of the definitive work on the artist (Paul Henry: Paintings, Drawings, Illustrations, New Haven & London, Yale University Press, 2007) said “the dot in the signature, between the words ‘Paul’ and ‘Henry’, was used by the artist in his early years and helps to date the work”.

Mr O’Driscoll said Boy with a Flute had been assigned number 1,295 in Mr Kennedy’s “ongoing cataloguing of Paul Henry’s oeuvre”.

The second drawing Woman With Fagots – charcoal on paper, signed lower right, 47cm x 23½cm – is dated 1904. Although unseen for decades it was previously catalogued by Mr Kennedy “as number 49 on page 108”. However, the auctioneers said that Mr Kennedy now planned to re-catalogue the picture as number 1,294.

Although Henry is best-known for his later oil paintings, he worked as an illustrative journalist in London from 1900-1910 where his charcoal drawings were exhibited at the Goupil Gallery.