Paintings, letters and personal effects of Yeats family to be sold in London auction

Items worth €2.1m belonging to John Butler and his four influential children for sale 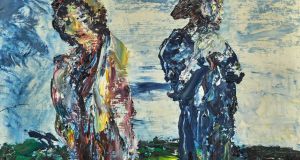 One of the biggest auctions of Irish cultural heritage will take place in London next month when Sotheby’s sells the “Yeats Family Collection” in the New Bond Street saleroom. More than 200 lots will go under the hammer which illustrate the literary and artistic life of Ireland’s best-known 20th-century cultural family.

The paintings, letters and personal effects of the family have a combined top valuation of £1.9 million (€2.1 million) but could sell for much more. The collection has been shipped to London where it will go on public view ahead of the auction on September 27th. The majority of artworks in the collection have not been seen in public for more than 30 years, and the personal effects have never been exhibited before. Sotheby’s said the collection sheds new light on the artistic development of “one of Ireland’s most important families of the last century” and reveals “a little of what life was like inside the Yeats family home”.

The collection comes from Cliff House, Coliemore Road, Dalkey, Co Dublin, the former home of poet WB Yeats’s son Michael Yeats, the late Fianna Fáil senator and MEP, one-time cathaoirleach of the Seanad, and first Irish vice-president of the European Parliament who died in 2007 and his wife Gráinne, a harpist, who died in 2013. It was inherited by their children Caitríona, Siobhán and Pádraig who all live abroad. A sibling, RTÉ producer Síle Yeats, died in 2007.

Many of the items are of major literary and artistic significance for 20th-century Irish culture. The top lot is a collection of 133 correspondence between WB Yeats and his life-long friend and first lover, the English writer Olivia Shakespear, which is expected to sell for up to £350,000 (€394,000).

According to Sotheby’s: “This correspondence, covering many decades, in which Yeats writes about his beliefs, passions and poetic development is of the highest importance to literary history and is an exceptional rarity on the open market.”

In the letters, Yeats comments on major events in the 1920s and 1930s including the War of Independence, the Anglo-Irish Treaty, the Civil War and his dalliance with the Blueshirts. He also comments on literary matters including his first impressions of James Joyce’s Ulysses: “I am reading the new Joyce – I hate it when I dip here & there but when I read it in the right order I am much impressed. However, I have but read 30 pages in that order. It has our Irish cruelty & also our kind of strength & the Martello Tower pages are full of beauty – a cruel playful mind – like a great soft tiger cat.”

And of DH Lawrence’s Lady Chatterley’s Lover: “the language is sometimes that of cabmen & yet the book is all fire”. Reflecting on the cruelty of the War of Independence he writes of an incident “three miles off near Coole, which is close to a main road the black & tans flogged young men & then tied them to their lorries by the heels & dragged them along the road till their bodies were torn to pieces. I wonder will literature be much changed by that most momentous of events, the return of evil . . .” In another letter, he notes, “when news came in of Michael Collins death, one of the ministers recited to the cabinet . . . the entire Adonais of Shelley” (the famous poem lamenting the death of poet John Keats).

Among the paintings in the auction are important oils by Jack B Yeats – widely regarded as Ireland’s leading 20th-century artist – among them The Runaway Horse which he completed in 1954, and which is valued at up to £250,000 (€281,000), and Sunset Belongs to You. There are also dozens of paintings and sketches by his father John Butler Yeats, some which had been on loan to the National Gallery of Ireland.

The auction includes many less expensive personal effects such as a pair of WB Yeats’s monogrammed, rosewood hairbrushes with a top estimate of £1,200 (€1,350) and Jack B Yeats’s collapsible silk top hat expected to make up to £700 (€800).

The State, which already has extensive holdings of Yeats material in the national collections, declined to buy most of the items. However, earlier this year, in February, the Yeats family sold a collection of manuscripts by WB Yeats to the National Library of Ireland (NLI) for €500,000.The collection, which included 10 signed letters and a postcard to WB Yeats from Joyce, was described by Minister for Arts Heather Humphreys as “incredibly important”. In 2016, the medal awarded to WB Yeats for winning the Nobel Prize for Literature was donated to the National Library of Ireland by the Yeats family. The medal was valued at €1.5 million and the family qualified for tax relief – of 80 per cent of its value – under Section 1003 of the Taxes Consolidation Act 1997. The Department of Arts did not say who had valued the medal.

The Yeats auction is the third big Irish sale at Sotheby’s in London this year. In May, art and antiques owned by the late Northern Ireland businessman Edward Haughey, also known as Lord Ballyedmond, sold for £4.5 million and in June, rare books from the Jesuit Library at Milltown Park, Dublin, sold for £2.7 million.

Sotheby’s said it would bring some key items in the collection back to Dublin for three days of public viewing at the Royal Hibernian Academy, Ely Place (September 14-16th) before they are returned to London for the auction on September 27th.

Who’s who in the Yeats family?

Born in Co Down in 1839, John Butler Yeats was a well-known artist – best known for his portraits. Some of his paintings hang in the National Gallery of Ireland and others occasionally turn up at auction from private collections. He died, aged 82, in New York in 1922 and was survived by four children who all became important cultural figures in early 20th-century Ireland: the poet William Butler, embroidery designer Susan Mary “Lily”, the [Cuala] printing press pioneer Elizabeth “Lolly”, and the painter Jack B.

WB Yeats was born in Sandymount, Dublin, in 1865, and became Ireland’s most famous poet, winning the Nobel Prize for Literature in 1923. He had an affair with the English novelist Olivia Shakespear and later married her friend, also English, Georgie Hyde-Lees. He died in France in 1939 (he was later reburied in Co Sligo) and was survived by two children Anne Yeats, the artist who died in 2001, and Michael Yeats, a barrister and Fianna Fáil senator who died in 2007.

Jack B Yeats was born in London in 1871 and died in Dublin in 1957. He is regarded as Ireland’s leading 20th-century artist. He was married to English woman Mary Cottenham and the couple had no children. Many of his paintings are in major public and private collections. In 2011, his painting A Fair Day, Mayo sold at Adam’s auctioneers in Dublin for €1 million – the highest price ever paid at auction in Ireland for art.

Michael Yeats was born in Dublin in 1921 and died in 2007. He was a barrister and Fianna Fáil politician. Like his father, he was a senator and he served twice as cathaoirleach of Seanad Éireann. He wife, the harpist Gráinne Yeats, died in 2013. The “Yeats Family Collection” was subsequently inherited by their surviving children – Caitríona, Siobhán and Pádraig – the last of the Yeats dynasty. Their family home, Cliff House. Coliemore Road, Dalkey, Co Dublin, was offered for private treaty sale by estate agents Sherry Fitzgerald in April 2017 with an asking price of €2.5 million.

Any bargains in the auction?

Apart from the major items in the auction there are some quirky, “affordable” lots – although the final prices could well exceed the top estimates (in brackets with euro currency equivalents supplied by Sotheby’s that will be used in the official sale catalogue):

54 Irish curses you won't have learned in school
2

The Roscommon man who became a sumo wrestler in Japan
5

Six months on the Blasket: ‘People accused us of ruining it’
6

Why did no one tell me IVF can lead to problems breastfeeding?
8

The Tipperary politician behind a huge Irish banking scandal
10