A kitchen you can bank on 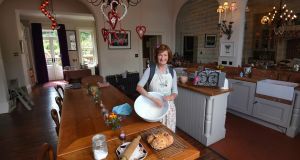 Pauline Sugrue in her kitchen-cookery classrom: “We were keen not to interfere with the house too much – what’s the point in having a modernised old house?” Photograph: Trevor McBride 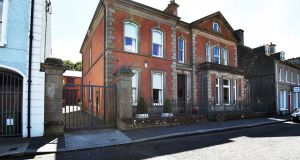 The old Edwardian bank, now a family home on main street in Ramelton, Co Donegal. “We kept the integrity of the old building while still making it into a family home, which we love dearly.” Photograph: Trevor McBride 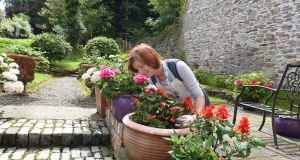 Wild Garlic Table chef Pauline Sugrue in her rear garden. “When we came here first, it was a maze of weeds and briars. It now has seven levels and terraces, a small vegetable area, lawns, two woodland gardens and a hen house.”

Imagine learning to cook in an Edwardian bank building where the kitchen is the original banking hall and the old safe cleverly doubles as the cool spot to store potatoes. “Wild Garlic Table” is a new cookery school and catering company run by Ballymaloe-trained Pauline Sugrue in her family home in Ramelton, Co Donegal. Home happens to be an early 1900s bank, which she and her husband Michael renovated some years ago keeping as many of its original features intact as possible.

From the first weighty, solid knock of the original front door handle there is a unique feeling as you pass through the entrance hall with original tiling and stained glass into this five-bedroom listed house. Sitting proudly by the river Lennon which runs into Lough Swilly, it has been restored with remarkable love and attention to fine detail by the Sugrues that ensures you feel the reverence of the building.

“The house was built in the 1903 in Edwardian style. It was built as a Northern bank, as far as we know, by an architect called William Ferguson from Belfast. It had just closed to the public when we purchased it in 2009,” said Sugrue.

The couple are originally from Galway and bought the house after living in Sydney, Australia for two decades. “Michael and myself left Ireland in 1989 with three of our children. It was an adventurous journey and we thoroughly embraced it. During our 20 years, I worked as a radiographer for the Southern Sydney Region. We had a wonderful life and our fourth son was born there.

“We moved to Donegal in 2009 and both Michael and myself have a particular passion for old houses. The bank at Ramelton seemed to fulfil all we desired in an old building. It took us two years to renovate and we moved in 2011 with our family, twins Conor and Alan and Gavin and Ryan. The excitement was, and still is, amazing [living here]. We kept the integrity of the old building while still making it into a family home, which we love dearly,” said Sugrue.

Knew what they wanted

Taking on a project like this did not faze the couple, who had previously lived in Victorian houses in Australia. Sugrue says that they were blessed with their architect and builder. “I suppose we knew what we wanted and we had a very sympathetic builder, Thomas McNamee and architect, Gregg Smeaton of Masterson Architects. We were keen not to interfere with the house too much – what’s the point in having a modernised old house?”

She wanted a new challenge and the time was right to move on. “I always had a desire to do the three month residential course at Ballymaloe cookery school and in January this year that opportunity came about.” At Ballymaloe, she perfected her skills and learned new ones under the watchful eye of Darina Allen, Rory O’Connell and Rachel Allen. Ballymaloe inspired Sugrue to start her cookery school and catering business, which she operates from the kitchen of the house .

It’s a big airy room warmed by a vast double Aga cooker. “I love the kitchen, everything happens here. The long kitchen table came from the rafters of a hospital in Queensland, Australia.”

“With successive [bank] managers the building had been modernised and we were keen to restore the Edwardian features as much as possible. Old light switches were sourced from around the globe; the switches from the Spanish embassy in London are our favourite. Light fittings came from France, door handles from England and Canada. There are majestically high ceilings and enormous original sash windows with slightly blurred old glass that lets you know they are not from this time.

“It is a listed building so we can’t change anything. Apart from the back doors, which are double glazed, and also, to make the most of the view of the back garden we put in a back door. That went through planning permission.”

It is not often that the toilet in a house is a show stopper, but the ground floor toilet which was originally an old pantry belonging to the kitchen, is one you will not forget.

“The toilet is not an original toilet, there was just an ordinary white ceramic toilet. We got that from the Gasworks in Clonmel. Apparently De Valera sat on that toilet.

“The sink is original, sure why would you throw them out?” said Sugrue. This sentiment echoes throughout the building. The original bank counter crops up in the toilet as a shelf.

On the staircase the gorgeously dense carpet is held in place by brass rods which the Sugrues sourced from an antique shop in Dublin’s Francis Street and “magically matched the 42 steps of the stairs,” said Sugrue.

The garden, which once had a lawn tennis court, has also been looked after. “When we came here first, it was a maze of weeds and briars. It now has seven levels and terraces, a small vegetable area, lawns, two woodland gardens and a hen house. We replaced some of the cemented patios with original cobbled stone we sourced from an excavation near Guinness in Dublin. Lichen-peppered lovely sandstone flagstones we got from the Burren and north Liscannor, where they had spent over 100 years on the roofs of outhouses. And then local stone supports the garden,” said Sugrue.

The house is remarkably toasty. They spent a lot of time researching how to heat the house and the insulation is a quirky feature that clearly works. “All the floorboards were taken up so we could put lamb’s wool down to insulate it. This is in wire netting stapled to the under surface of the two inch floorboards. It keeps the house lovely and warm.”

She says their home is a place she wants people to enjoy, and she has certainly created that feeling in this magnificent house.