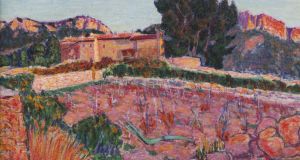 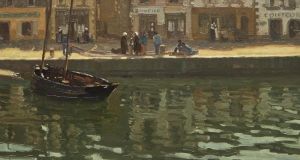 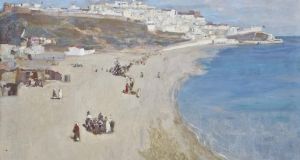 Adam’s, the country’s biggest fine art and antiques auctioneers, has started the autumn season at a cracking pace. Already this month, the company has disposed of the art collection of the former Anglo Irish Bank in a sale that greatly exceeded expectations and achieved a 93 per cent sold rate with many lots making much more than the estimate. And, last Sunday, the Interiors Sale achieved a sold rate of 68 per cent (see results, right).

The top lot in its upcoming Important Irish Art sale is a painting by the Irish Impressionist, Roscommon-born Roderic O’Conor, who worked in France in the early 20th century.

In 1913 he moved from Paris to the south of France and rented a villa in Cassis, where he painted two dozen oils and several watercolours during a nine-month stint.

Among them was The Farm, Provence, depicting the mountainous landscape of the Montagne de la Canaille. It was last exhibited publicly in 1985 at the Barbican gallery in London and is estimated at €150,000- €250,000. Auctioneer James O’Halloran described it as the “the nicest” O’Conor painting ever offered at Adam’s.

Also dating from 1913 is The Edge of the Cliff, Howth by Sir William Orpen depicting the artist’s seven-year-old daughter, Kit, seated on Howth Head, overlooking the Baily Lighthouse. The painting was once in the Jefferson Smurfit Group Collection and is estimated at €120,000-€180,000.

The Lobster Fisher at Dusk by Paul Henry, painted in the early 1920s in Co Mayo and one of his best-known paintings, has been widely exhibited in loans to various public exhibitions and is now being sold by its private owner. The estimate is €100,000-€150,000. Potato Gathering by Walter Frederick Osborne, which sold for 30 guineas at an exhibition in Dublin in 1889, has an estimate of €60,000-€80,000.