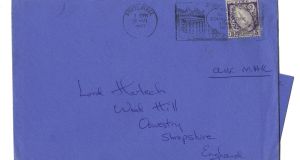 A letter sent in 1967 by Jackie Kennedy to David Ormsby Gore. It was posted in Waterford

The news that unseen letters by Jackie Kennedy are to be auctioned has a “groundhog day” quality. Three years ago Sheppard’s Irish auction house in Co Laois was asked by the former Dublin seminary All Hallows to sell correspondence she had sent to an elderly Irish priest Fr Joseph Leonard. However, the Vincentian Order, of which Fr Leonard had been a member, intervened to stop the sale and returned the letters to the Kennedy family in the United States. Before the auction was cancelled, extracts from the letters were published exclusively by The Irish Times and they shed new light on Jackie’s early life, marriage to John F Kennedy and the aftermath of his assassination in 1963.

Now Bonhams auction house in London is to sell unpublished “heartfelt personal letters from Jackie Kennedy to David Ormsby Gore (the Fifth Lord Harlech), Britain’s ambassador in the USA during the Kennedy presidency” in London on Wednesday (March 29th) with a top estimate of £150,000 (€173,000).

They reveal, for the first time, that Ormsby Gore proposed marriage to Jackie Kennedy, why she turned him down, and why, shortly afterwards, she married Aristotle Onassis, the Greek shipping tycoon.

Among the correspondence being sold are two items that Kennedy posted to Ormsby Gore while she was holidaying in Woodstown, Co Waterford, in the summer of 1967. Bonhams said “she wrote these letters of friendship and support from Woodstown House just weeks after the death of David Ormsby Gore’s wife Sissie. Jackie clearly felt happy in Ireland and perhaps saw it as a place of peace and privacy where she could holiday with the children safely away from the glare of publicity.”

Further letters reveal that in February 1968, Ormsby Gore proposed marriage to Jackie, but she rejected him and married Onassis eight months later.

What sold for €310k and less in Blackrock, Clonsilla, Bray and Co Meath
6

I am a victim of emotional abuse ... it felt like my husband had died
9