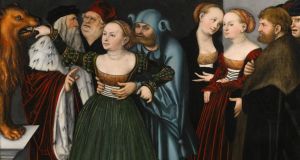 A detail from ‘La Bocca della Verità’ by German artist Lucas Cranach the Elder: a “masterpiece of German Renaissance painting”

Irish interest in last month’s London week of ‘Old Master’ auctions waned following the withdrawal from Christie’s by the Alfred Beit Foundation of the Russborough House paintings, including two by Rubens.

Instead, the highlight turned out to be a stunning 16th century painting entitled La Bocca della Verità (The Mouth of Truth) by German artist Lucas Cranach the Elder. It sold at Sotheby’s for £9.3 million (€13.3 million). That exceeded the estimate of £6 million-£8 million and set a new world record price for the artist at auction.

Cranach (1472-1553), who is regarded as one of the greatest German painters, was a key figure in the Reformation and was close to Martin Luther whose portrait he painted. He was famous for his religious paintings and mythological scenes, most of which are now in museums.

This painting – oil on a red beechwood panel, measuring about 44in by 40in – was consigned to auction from “an important European private collection”.

Sotheby’s described La Bocca della Verità, painted in Wittenberg around 1525-28, as a “masterpiece of German Renaissance painting” and among the artist’s most important works remaining in private hands. The painting shows what the Daily Telegraph described, inimitably, as “an adulteress defying a medieval lie-detector test”.

One of Rome’s most-visited tourist attractions, La Bocca della Verità is an ancient marble sculpture depicting the face of a river god and is located in the entrance of the Basilica de Santa Maria in Cosmedin. The sculpture is regarded in popular culture as a sort of lie detector: tell a lie while your hand is placed in the mouth and it will be bitten off. It was famously featured in the 1953 film Roman Holiday starring Audrey Hepburn and Gregory Peck.

In a catalogue note, Sotheby’s says that during the Middle Ages the stone mask of La Bocca della Verità had become the subject of a popular story and legend that “a woman accused of adultery was required to place her hand inside the mouth of the ancient mask in the presence of her husband and a judge”.

According to the catalogue notes which are designed to assist contemporary viewers to “read” the painting, the accused woman “conceived a cunning plan when brought before the statue by dressing her lover up as a fool and instructing him to embrace her just before she reaches her hand into the statue’s mouth, thereby saving herself from exposure and humiliation by announcing, ‘I have never been touched by a man other than my husband and by this fool here beside me’.

“On the right of the scene, Cranach has depicted the cuckolded husband in a sombre black coat, his intense gaze fixed on the lion in anticipation of the verdict. The adulteress confidently places her hand inside its mouth, not with a look of fear, but rather in the assurance that she will come to no harm thanks to her clever deceit of disguising her lover who, dressed in blue as a fool, grasps her around the waist, seemingly of no concern to the husband.

‘I wouldn’t be here without it’: The importance of exercise to teenagers
6