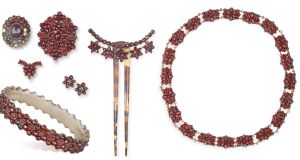 Adam’s of St Stephen’s Green in Dublin will hold its first sale on July 5th, after suspending auctions due to the coronavirus pandemic.

Featured among the 350 eclectic lots of its At Home sale is a set of 200-year-old garnet jewellery that marks the unrequited love of British romantic poet and satirist Lord Byron.

In 1803 Byron, at the age of 16, fell in love with his somewhat older distant cousin Mary Ann Chaworth and gifted her this set of garnets. Though she was betrothed to another, she continued to influence Byron throughout his life. He once wrote: “Had I married Miss Chaworth, perhaps the whole tenor of my life would have been different.”

The set was purchased in Nottingham a century ago by the current vendor’s grandfather, and is listed with an €800-€1,200 estimate.

Of further female interest is a set of six silver dessert spoons from the early 19th century. At that time the craft of silversmithing was traditionally a male-dominated field. Most women who worked in that realm gave up their trade after marriage or, if they continued to work, did so under their husband’s identity and mark.

Mary Sumner, after the death of her husband, re-emerged as a silversmith and was afforded the opportunity to enter her own mark along with her daughter Elizabeth in 1809, which makes this lot dated 1814 highly unusual for its time (lot 27: €100-€200).

The sale also features some nice pieces of cast-iron garden furniture, which remains the beloved staple in traditional Irish gardens.

Included is a lovely Gothic-pattern set of a two-seater bench and matching chair. While their durability means they are a bit tough for sitting on, cushions will add both comfort and colour.

Also featured are cast-iron urns of varying sizes. The taller ones – just over a metre in height – with the addition of flowering plants, would provide colour and interest at eye level on patios.

Cast iron differs to other types of outdoor furniture in its intricate design and attention to detail, making it a work of art in itself.

While there are many new materials on the market today, the benefits of cast iron are hard to beat. Its durability and weight will stand the test of time for many lifetimes, which is why it remains a favourite in Irish gardens. It will not blow over, unlike its aluminium and rattan counterparts, and can be painted in all colours to suit contemporary or traditional settings. It is worthwhile – if a piece is layered with decades of paint – to have it stripped back and repainted to give the seat, table or urn longevity.

Tony Doody of DipStrip has been restoring cast-iron furniture from his workshop in Dún Laoghaire for years. “After stripping a piece of cast-iron furniture we give it three coats of special paint, which chemically bonds with the metal. This will give the piece a new life that will last anything from ten to twenty years.”

He also points out that new cast iron furniture is in no way as strong as its older counterparts: “It has a powder-coated finish and is not heated enough; this means it is of an inferior quality, and like aluminium it will corrode. Genuine old cast iron is worth the investment and it will last a lifetime.”

The Adam’s catalogue will be online this coming Thursday, June 25th. See adams.ie and dipstrip.ie.

Sun, shade, dry or windy – there’s a rose to suit every kind of garden
10