Hegarty and his wife specialise in the sale of Irish furniture, silver, glass and paintings 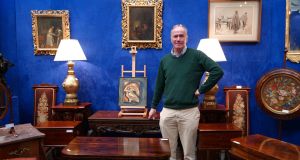 Auctioneer Ted Hegarty: “I don’t really personally collect anything in particular – the dealer in me doesn’t allow it. Everything is for sale.” 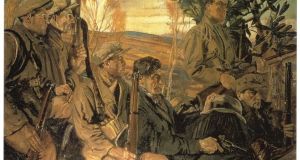 ‘Men of the South’ by Sean Keating: painting displayed in the Crawford Gallery in Cork is Ted Hegarty’s favourite work of art

Ted Hegarty runs Hegarty Antiques and Fine Art Auction Rooms – established by his late father – in Bandon, Co Cork. He, and his wife Margaret, hold monthly auctions of art and antiques in their saleroom in the Parnell Business Park outside the town – where the business relocated six years ago from Weir Street in the town centre. He specialises in the sale of Irish furniture, silver, glass and paintings of all periods, and particularly items made in Cork.

My father was an antiques dealer and auctioneer in Bandon and it fell to me to follow him into the trade. I attended Hamilton High School in Bandon, where I developed a keen interest in history.

From an early age, I attended antique sales and shops with my father and had an eye for detail. When I was 12, I accompanied my father to Bantry House where he was to assist in the disposal of some select pieces.

When I got home that evening, I was able to recollect every item of furniture in the house – in some detail – to my mother. I didn’t know it at the time but I had been bitten by the bug. When I left school, I followed my parents’ advice, taking up a “permanent and pensionable job in the bank” and joined AIB and was posted to the branch in Newcastle West, Co Limerick. But, alas, we were not of like mind and, after 18 months, I left to pursue my passion – antiques.

I did, however, meet my wife, Margaret, while I was in the bank – she was working in Newcastle West in her uncle Patrick J Barry’s accountancy firm – so it was not a worthless exercise. She also left her job to join me in the auctions business.

I went to Dublin to study ceramics restoration for a year with the distinguished restorer Desirée Shortt on North Great Georges Street. Then it was on to London to learn picture restoration with Sebastian Minton, a master at his craft. I lived in London for two years and was a regular visitor to galleries and museums.

I particularly loved the V&A and would advise anyone to visit the Wallace Collection – an amazing collection of art, furniture, porcelain and old master paintings all housed in Hertford House on Manchester Square. I returned to Ireland in 1990 armed with a fine knowledge of those skills. I later returned to England to do some courses in furniture restoration with Gerard Langley of Newark.

What advice would you give collectors and investors?

Know your subject, plain and simple. There’s a wealth of information out there and there is no end to learning about antiques or art. But, ultimately, there’s no substitute to looking at as many pieces as possible. Auction viewings, dealers’ shops and antiques fairs are the training grounds for the tyro collector. Museums exhibit the very finest of the genre but you can’t touch the items – unlike at an auction viewing – and there is rarely anybody around to talk to about the displays.

Purchase the best your budget will allow; an investor will see a better return from one good piece for €10,000 than 10 ordinary pieces for €1,000 each. Set trends rather than follow them. Target a lesser-known artist and champion his or her cause. Irish art of the 20th century is undervalued compared with European art.

I took in a collection of glass plate negatives that belonged to an Irish clergyman who had taken a group of pilgrims to the Holy Land in the late 19th century. The collection included rare early photographic images of the first Irish tourists in the Middle East and also images of Kerry including schoolchildren, mostly shoeless, on their way to school and a woman, barefoot, at the door of her cottage, smoking a pipe. The collection was hard to value but surprised everybody by selling for €4,000.

Last year, a collection of books came in that looked very distressed and fit only for the recycling bin. However, a partial copy of the History of Cork was bound in with some mysterious newspapers entitled The Brigade Major – published over a three-month period in 1810. A quick perusal of their contents revealed it to have been a scandal sheet of some temerity – the probable cause for its short-lived nature. The word unique is misused in this business but this lot fitted the bill.

The collection had a top estimate of €200 but sold for more than 10 times that amount to the National Library of Ireland. The vendors were pleased that the newspapers had been rescued from a possible ignominious end.

What do you personally collect?

I don’t personally collect anything in particular; the dealer in me doesn’t allow it. Everything is for sale.

A collection of top-class 18th- century Irish furniture, silver and glass, where people could come and study the outstanding workmanship of the 18th century Irish craftsman. A major public collection of these items is not currently available to be viewed on a large scale for academic research.

What is your favourite work of art and why?

A painting called Men of the South by Seán Keating at the Crawford Gallery in Cork. It depicts a group of IRA men in Cork during the War of Independence. It has a defiance and a manliness about it that really is of its time.