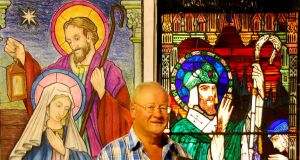 Ken Ryan is chairman of Abbey Stained Glass Studios in Kilmainham, Dublin. It’s a family business, founded in 1944 by his grand uncle Tom Ryan and then run by his father, Frank.

The company is involved in the conservation and restoration of church stained glass windows. Although now semi-retired, he is “delighted to give every assistance that I can as the business enters the fourth generation”.

I was born in Dublin and brought up in Clontarf, where I attended Belgrove National School and then St Paul’s Vincentian College, Raheny. I studied quantity surveying at the College of Advanced Technology in Bolton Street. At the age of 21, I accepted an 18-month contract from John Sisk to go to Malawi in Central Africa as a quantity surveyor – a great learning experience – and then returned to Ireland.

When I was 26, I married Eileen McSweeney from Inchigeela in West Cork and we emigrated to Rhodesia [now Zimbabwe], which I had previously visited. We sailed from Southampton to Cape Town and then drove 2,000 miles to Salisbury [now Harare].

I was invited by Harry & Bernard Cullinane from Knock, Co Mayo to join with them as a partner in a construction company and, so, Cullinane Brothers & Ryan Ltd was formed and the company prospered as we carried out major building projects and civil engineering schemes throughout Rhodesia.

But by 1976, the War of Independence was in full swing and the Rhodesian government called up European men for military duty to engage in this unwinnable war.

Because of my construction experience, I was assigned to oversee military building projects in remote parts of the country. For four years, we had alternate stints of six weeks in the army followed by six weeks off, when we tried to keep our construction business going – which included contracts from the Irish Carmelite Fathers to re-build their ransacked mission stations.

The war ended in 1980 and Britain granted independence to the newly-formed Zimbabwe. Our construction company was extremely busy for the next three years. Unfortunately, Eileen died of cancer in Harare aged 38, and I returned home.

How did you get into the business and what does the company do?

Back in Dublin I met up with Muriel Lowry, whom I had gone out with as a teenager. She also had become widowed when her husband Enda Wymes, a classmate of mine, died, also aged 38 . Muriel and I were married in 1984.

She had a degree in art history, and we both joined my father Frank in Abbey Studios. When he died, a year later, I became managing director of the business and Muriel became artistic director.

The work involved surveying and restoring stained glass windows in churches throughout Ireland. Harry Clarke’s windows, with the deeper, darker shades of glass, need to be conserved and restored every 50 years, while the more pastel shades such as the windows made by Mayer’s of Munich, can survive for up to 100 years before they need attention.

We were contracted to restore the stained glass Stations of the Cross by Harry Clarke from the Lough Derg Basilica in 1989 and, before we returned them, we put them on exhibition in the Royal Hospital Kilmainham for three months. We were astonished at the public interest – about 25,000 people came to see this delicate artwork.

The OPW engaged us to restore and fit the magnificent Evie Hone window My Four Green Fields depicting the four provinces of Ireland in the main staircase of the Taoiseach’s office in Government Buildings. This window was originally designed for the Irish Pavilion at New York’s World Fair in 1938.

What advice would you give to collectors/investors?

Harry Clarke’s stained glass comes up for sale at auctions infrequently. Professional advice should be taken before bidding and the provenance of the work must be established. Even though much of his glass has a religious content, the smaller panels can be set into illuminated cabinets if they are to be housed in a domestic setting. Never expect to sell for a quick profit – so only buy stained glass art that you enjoy and keep it for the long term.

I have bought some of George Walsh’s non-religious stained glass panels in illuminated cabinets from the annual RHA exhibitions. I also acquired some Harry Clarke Studios sketches and coloured stained glass cartoons at auction. I appreciate these pieces for enjoyment rather than seeing them as an investment .

What would you buy if money were no object ?

The Queen’s Panels by Harry Clarke – nine exquisite glass panels based on the Queens poem by J M Synge. I watched them being sold at a Christie’s auction in London in 1997 for £330,000. They are now in a private collection

What’s your favourite work of art and why?

The Geneva Window by Harry Clarke – containing eight panels featuring 15 illustrations from contemporary Irish literature . My father first brought me to see it in the Hugh Lane Gallery in my teens and the miniature fluorescent detail in the rich glasses is perfection.

The window was commissioned by the Irish Government for the League of Nations’ International Labour Building in Geneva, in 1929, for £450 but was not accepted by our politicians of the day as they thought the subject matter to be “too risqué”. It is now in the Wolfsonian Institute, Florida, and beyond monetary value.

What is the going rate for a home in...Co Kilkenny?
6

Five ways to enjoy a heatwave outdoors during lockdown, without breaking the rules
10