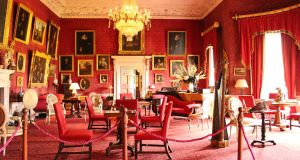 Most of the main Irish auction houses are “resting” for Hallowe’en and the schools’ mid-term break after a hectic autumn, but have already announced dates for the final sales of 2016.

De Veres art auction in the RHA Gallery on November 22nd will include a collection of paintings that had been on loan to – and on display in – the former Four Seasons Hotel in Ballsbridge (now under new management and renamed the InterContinental Dublin).

Whyte’s auction on November 28th in the RDS will include a further selection of paintings from the McClelland Collection.

Sheppard’s will hold a three-day auction titled “Dublin & Provincial” at the saleroom in Durrow, Co Laois on November 29th & 30th and December 1st, and the auction will include paintings from the former All Hallows seminary.

Among the London auctions of Irish interest: Sotheby’s will auction Sleep Sound by Jack B Yeats, from the private collection of the late David Bowie, on November 10th; Bonhams will auction a selection of Irish art in its New Bond Street saleroom on November 23rd; and Christie’s will hold auctions of Modern British & Irish Art on November 23rd and 24th, including paintings by Jack B Yeats and Sir John Lavery. Newbridge House Auctions aside, collectors may be interested in seeing the contents of Newbridge House, Donabate, Co Dublin, although they are most definitely not for sale.

On Tuesday, November 8th, the Irish Georgian Society and Fingal County Council, in collaboration with the Cobbe family, will hold a study day on-site to examine the history and conservation of Newbridge House’s architecture, designed landscape, decorative interiors and collection.

Among the topics and speakers are: “Preserving the Taste of Thomas and Lady Betty Cobbe at Newbridge” by Alec Cobbe, Newbridge House; “India Pictures and Irish Flocks: global and local aspects of the wallpaper trade in Georgian Ireland” by David Skinner, wallpaper maker and historian; “The Newbridge Hobbema and some Observations on other Dutch and Flemish Works in the Cobbe Collection” by Dr Adriaan Waiboer, curator of Northern European Art, National Gallery of Ireland; and “Newbridge: Managing Historic Properties – the Local Authority Perspective” by Fionnuala May, county architect, Fingal County Council.

For further details and to make bookings, contact the Irish Georgian Society or see igs.ie