Get an ‘affordable Yeats’ for Christmas at Whyte’s 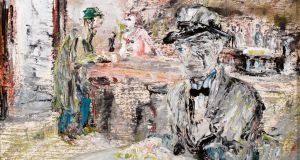 Jack B Yeats, The Man With The Wrinkled Face

It’s that time of year when our shops are stacked high with Christmas cards of every conceivable shape, size and price. Yet one of the classiest Christmas cards you’ll ever see is going under the hammer at Whyte’s sale of Important Irish Art at the RDS on Monday week.

A tiny watercolour stencil of a robin – it is dated Christmas 1904 – carries the handwritten greeting “this very cheerful bird is to wish you a very happy New Year”, and is signed by one of the most highly sought after Irish painters in the world Jack Butler Yeats.

This expressive work was part of a major Yeats national loan exhibition in Dublin in the summer of 1945. As so often with Yeats, the subject of the painting is an isolated ambiguous figure. He wears a smart hat and bow tie, but the painter has rendered his face as an almost sculptural enigma. In the background another man leans towards the bar, chatting to a heavily made-up barmaid; behind that again an open door reveals a set of steep steps leading upwards.

Somewhere between the magisterial oil and the mischievous robin a lively pen, ink and watercolour drawing illustrates another side of Yeats’s output. Depictions of country life in the west of Ireland were among his most popular works during his own lifetime, and St John’s Eve Bonfire Night (Lot 27, €12,000–€18,000) was executed around the time of a 1905 visit to Belmullet, Co Mayo, by Yeats and John Millington Synge.

One of the most heartening trends in the current Irish art market is the surge in appreciation for Irish women artists, many of whom have been ignored and neglected until relatively recently.

This sale includes a striking self-portrait by Margaret Crilley (Lot 22, €20,000–€30,000), who is perhaps better known by her married name of Margaret Clarke – her husband was the stained-glass artist Harry Clarke. Twice loaned to the National Gallery, first in 1987 for a show by Irish women artists and last year for a major retrospective, this painting comes to the market after decades in a distinguished private collection.

The evocative Image of Samuel Beckett (Lot 55, €150,000–€250,000), painted in 1994, belongs to a series of paintings which celebrate famous literary and artistic figures. The writer’s hands and his head are recreated in a work which, in its intensity, stillness and gentle humour, conveys, as the painter himself put it, “the Beckettness of Beckett”.

Among the sculptures are works by John Behan, Edward Delaney, Rowan Gillespie and Carolyn Mulholland, as well as two of Rory Breslin’s “river” masks, the Shannon and the Bann (Lots 91 and 92, €8,000–€12,000).

‘Black Americans and Irish have a lot in common. I feel we’re connected’
8

And the winner is....yes, it’s time again for the prestigious Car of the Year award
Real news has value SUBSCRIBE