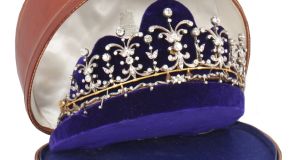 The tiara, believed to date from the 1930, was once owned by the Honourable Doreen O’Brien, a daughter of the14th Baron of Dromoland Castle, Co Clare

Sheppard’s ended a busy year with a one-day sale in Durrow, Co Laois, on Tuesday where the top lot was, to general surprise, Lot 514, “two polychrome painted enamel and silver cups” made in late 19th century Vienna by Austrian craftsman, Herman Boehm which made €24,000 – three times the top estimate (€5,000-€8,000). The cornucopia-shaped cups, decorated with mythological scenes were bought by a bidder in London.

The winning bid of €20,000 for a diamond tiara – the most admired lot in the auction – also came from London and beat strong competition. The price was more than twice the top estimate (€6,000-€9,000). The tiara, in its original leather case, from London jeweller Hancocks and Co and believed to date from the 1930s was once owned by the Honourable Doreen O’Brien, a daughter of the 14th Baron of Dromoland Castle, Co Clare. She died in England in 1960. The tiara had been consigned by an unnamed descendant.

Before bidding got under way, auctioneer Michael Sheppard announced to the saleroom that Conor O’Brien, the 18th Baron Inchiquin, wished it to be known that he was not the vendor. Mr O’Brien lives on the Dromoland estate but the castle itself was sold in the 1960s and is today a luxury hotel.

Irish abroad: Are you worried about when you can visit home again?
4

‘I saw young girls get kicked, hit, sprayed and dragged off gasping for air’
7

Ask the Expert: Why do young children pull out their hair?
10