Contents of Doon convent in Limerick to be auctioned

The auction features some 400 lots, including antique furniture, a Victorian pipe organ, a confession box, religious prints and statues 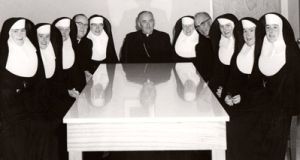 Nuns from the Convent of Mercy in Doon, Co Limerick

Yet another convent has closed down as the role of nuns in Irish life continues to recede. Yesterday, after 151 years in the village of Doon, Co Limerick, the Convent of Mercy closed and the last seven of the nuns departed for new homes.

PJ O’Gorman – a Charleville, Co Cork-based auctioneer who is beginning his 51st year in the business – will sell the contents of the convent in an auction on the premises in Doon next Saturday, starting at noon.

The closure of the convent is the latest in a wave of religious institutions closing down due to the steep decline in vocations. The Convent of Mercy in Doon (in east Co Limerick on the Tipperary border) was established in 1865.

O’Gorman said the auction would be his 12th of the contents of religious institutions; he has previously conducted similar sales for both nuns and Christian Brothers.

The auction features some 400 lots, including antique furniture, a Victorian pipe organ, a confession box, religious prints and statues.

The contents will go on view in the convent on Friday, July 8th, from 10.30am.

There is likely to be a large attendance and much interest. Last year, an auction of the contents of the Mercy Convent at Balloonagh, Tralee, Co Kerry, by auctioneers Lynes and Lynes, unexpectedly turned out to be the most successful auction of the year in Ireland, with all of the 532 lots sold. Auctioneer Denis Lynes said afterwards that interest had been “phenomenal” and that bidders included past pupils and priests “from Belfast to Cork”.

If the Doon auction follows suit, there is likely to be strong demand for religious statues. O’Gorman says there are “some gorgeous statues” of various saints for placing indoors as well as a selection of large garden statues

Sean Moncrieff: ‘I often want to applaud gorgeous women. But that would be creepy’
Real news has value SUBSCRIBE