Contents of Bantry House to be auctioned by Scottish firm

Auctioneers Lyon & Turnbull say sale is their first in Republic 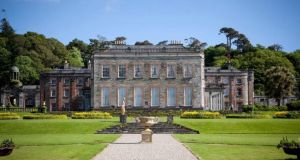 Bantry House: auctioneers Lyon & Turnbull said they hoped to raise about €1 million from the sale of the house’s contents, which include paintings, furniture, books and French tapestries. Photograph: Lyon & Turnbull /PA Wire

The contents of Bantry House in west Cork – one of Ireland’s best-known stately homes – will be sold at auction this autumn.

One of Scotland’s leading fine art auctioneers Lyon & Turnbull has been appointed to conduct the sale which will take place at the house in October. A spokesman for the Edinburgh-based company said the Bantry House auction would be their “first in the Republic of Ireland”. The decision to appoint an overseas company will disappoint Irish auction houses.

Bantry House was the family seat of the Earls of Bantry in the 19th century but the title became extinct in 1891. It is still home to the ninth generation of the Shelswell-White family and has been open to the public since 1946.

The house is used as a concert venue during the annual West Cork Chamber Music Festival and the east wing has been converted for a B&B business.

In a statement, the family said “many of the objects in the sale are of museum quality and need to be expertly cared for” and that the money raised would “inject a new energy into the house” and “make it possible for Bantry House to have a future as a successful place, more in step with the times we live in.”

They said “the house and gardens will continue to be open to the public and they hope to hold more weddings, concerts, exhibitions and other events, aiming to extend the season into the winter months, securing and creating jobs for those involved with the house”.

The auctioneers said they hoped to raise about €1 million from the sale which includes paintings, furniture, books and exquisite French tapestries – reputedly made by order of Louis XV for Marie Antoinette – collected by the second Earl of Bantry. The auction will also include a pair of portraits of King George III and Queen Charlotte, presented by the king to the first Earl of Bantry on his elevation to the peerage in 1816.

The auction is the latest by an Irish “Big House” via an overseas auction house. Last month, Westport House in Co Mayo sold a piece of sculpture at Sotheby’s in London for £362,500 (€445,000). The 19th century French life-size terracotta statue “Boulonnaise allaitant son enfant” by sculptor Aimé-Jules Dalou was bought by the National Gallery of Canada.