All Hallows to sell art and rare books next month 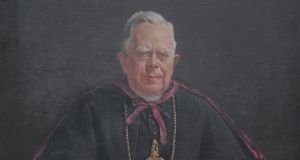 Some 14 ecclesiastical paintings and 17 books are to be auctioned by Sheppards. Above: Portrait of Archbishop William Walsh, 1841-1921, oil on canvas, by Leo Whelan

Art and rare books from All Hallows College, the former Catholic seminary in Drumcondra, Dublin, are to be auctioned next month.

Some 14 ecclesiastical paintings and 17 rare books have been consigned to Sheppard’s auctioneers in Durrow, Co Laois, and will go under the hammer on July 9th and 10th.

The art illustrates the former power, prestige and global reach of the Irish Catholic Church. During the late 19th and early 20th century, All Hallows was one of the best-known seminaries in the world and ordained thousands of priests.

Among the paintings for sale are portraits by early 20th century Dublin artist Leo Whelan – each valued at between €1,500 and €2,500 – of bishops, archbishops and cardinals in full regalia, including William Walsh, the archbishop of Dublin who died in 1921.

The top lot among the books is a 15th century Flemish Book of Hours. The illuminated manuscript on vellum, written in French and Latin, is valued at up to €60,000.

The college has dismissed claims that its art and rare books collection was “worth millions” and said that, following the consignment to auction, its remaining archive was “potentially of great value academically but not financially”.

All Hallows had hoped to sell letters written to one of its priests by Jackie Kennedy, the former US first lady, but these were withdrawn following a dispute about ownership.

Last month All Hallows announced that it would close. The fate of the college buildings and land has yet to be decided.