A ‘Dutch’ auction in Blackrock 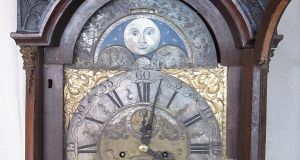 Detail of a walnut musical grandfather clock made by Douwe Jelles Tasma in the Dutch town of Grouw in 1820, for auction with an estimate of €6,000-€8,000

The first auction of the year at south Co Dublin auctioneers Adams Blackrock has an unexpected Dutch feel. The Fine Art & Interiors auction, on Tuesday at 11am, includes the contents of the Kenmare, Co Kerry, home of the late Eva Tenback-Biesta, who moved from the Dutch city of Groningen to Ireland in 1980 with her husband, Bob, who, according to the auctioneers, had been a member of the Dutch Resistance during the second World War. He died in 2012; she in 2014.

Among the lots is a burr walnut musical grandfather clock made, in 1820, by Douwe Jelles Tasma in the central Dutch town of Grouw, and estimated at €6,000-€8,000.

The eclectic sale also includes mink coats, Chinese porcelain, antique furniture, Dutch silver and a selection of art and antiques from other clients. Normal bidding rules apply – unlike a traditional “Dutch auction” in which the auctioneer begins with a high price and keeps lowering it until a willing bidder is found.