Fancy moving to the coolest place on the planet? 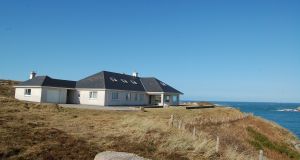 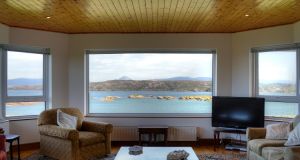 The view from the livingroom of Cruit Island House which is for sale through Savills at €580,000 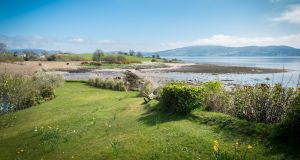 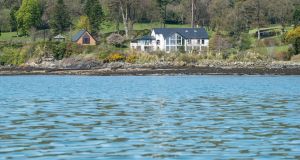 Donegal property is likely to get a boost from the county’s designation as the coolest place on the planet according to National Geographic. The county’s housing stock includes a large selection of waterfront homes overlooking the kind of pristine beaches and wild mountain landscapes highlighted by the international magazine.

Take Cruit Island House at Kincasslagh, a sprawling five bedroom house on a remote nine acre site, overlooking the wild Atlantic and with a garden gate leading directly to a beach.

Part of a scattering of islands off the mainland, Cruit is in an area of spectacular beauty with wide ranging views towards Mount Errigal to the north and the Blue Stack Moutains to the south.

The modern house is on the market through Savills at €580,000. Cruit Island is a small sparsely populate island reached by a bridge from Bellcruit. It’s five kilometers from the village of Kincasslagh with a greater selection of shops and the facilties 12 km at away in Dungloe.

The same agent is asking €1.25 million for Apple Tree House, an imposing property on two acres of waterside gardens near the picturesque village of Rathmullan.

Stretching over 374sq m, the glass-fronted property has an idyllic setting on the sandy shores of Lough Swilly, one of Ireland’s great sea inlets stretching 40km inland.

Inside the split level house, where all the rooms look out to sea, there are several reception areas – art room, games room, library, dining and living rooms, and a spacious kitchen which opens out onto one of the many terraces.

Auctioneer Paul McElhinney of REA McElhinney in Milford, describes Donegal as “the forgotten county” when it comes to property and indeed for most of the year there has been a lot of uncertainty around sales of holiday homes there given that many would be clients from northern Ireland are waiting to see how Brexit pans out. He currently has a number of seaside homes for sale, including a four-bedroom beachfront chalet at 12 Rockhill Caravan Park, Kerrykeel, overlooking spectacular Mulroy Bay

There are plenty of properties for sale under €100,000 in the county including a town house that was once in shop in the pretty village of Ramelton. For sale through Property Partners Paul Reynolds at €80,000, the two storey house which is beside the Bridge Bar needs complete renovation. It once operated as a shop and one of the rooms still has its old counter, weighing scales and matchboard walls.

Meanwhile, in the far northwest, a development of holiday homes overlooking Sheep Haven Bay right on the Atlantic and with 188 acres of land, 27 new holiday homes are priced from €239,000. The agent here is DNG Boyce Gallagher.

The Irish county tops The Cool List: 17 for 2017, the UK magazine’s annual roll call of places to visit in the coming year, which was headed last year by Iran.