London-based Carmody Groarke architects is forging a reputation for innovation by collaborating on short-term builds and art projects. This in turn is inspiring more adventurous long-term projects 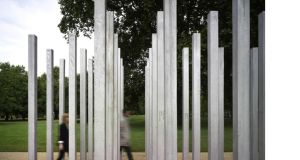 The Hyde Park monument mirrors the places where the four London bombs went off and has 52 stainless steel columns, each representing a victim 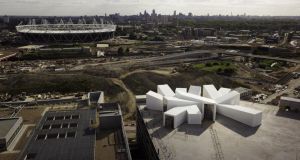 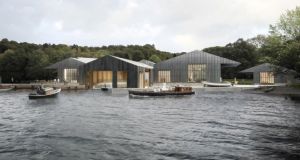 The Windermere Steamboat Museum in Cumbria

The process of architecture is one of improvisation, says Andy Groarke of Carmody Groarke architects, kicking off the third season of the Newnownext series of talks in Dublin. Curated by the Irish Architecture Foundation (IAF) the talks are sponsored by Arup.

Carmody Groarke has built up a reputation as one of the most dynamic emerging practices of the moment: it takes innovation and bravery to be exciting.

When the recession hit in 2008, taking building projects with it and tipping many architects out of their jobs, it was suggested this could be a chance for work-free architects to experiment and learn – not always easy financially or psychologically when your luck is down.

Kevin Carmody and Andrew Groarke faced this after setting up in practice having met at David Chipperfield Architects. Things began well, but when the downturn came they took a new course and designed temporary buildings and “art” projects.

As Nathalie Weadick of the IAF said in her introduction to the talk last Wednesday evening: “Fleeting and temporary projects have informed your practice.”

Themes that emerged from their workshop of smaller projects included the way people connect with places, capturing views, how buildings elicit emotions and behaviour, the creation of series of spaces rather than monoliths, knitting into context, how art and architecture can work together, the use of light, and considering both people’s singular and collective experience of places. The latter came up in their memorial in Hyde Park to the London bombings on July 7th, 2005. They were the only architects up for the job, the other eight contenders being artists.

Art and architecture have had many a crossover in history and this intermingling is strong today, with Assemble architects on the Turner Prize shortlist and the new nipple-adorned house in Essex created by artist Grayson Perry and FAT Architecture.

Carmody Groarke’s projects inform each other. At the time of the Hyde Park project, they were also working with artist Antony Gormley on a pavilion called Blind Light in London’s Hayward Gallery – a luminous glass box that made silhouettes out of visitors.

This led them to look at how to use light to create an immersive space, along with taking a “specific interest in the meaning and making of materials”, while the “theme of the singular and collective experience of a public space became really important”, says Groarke.

The Hyde Park monument is both literal and spiritual: it is in four parts mirroring the places where the four London bombs went off and has 52 stainless steel columns, each one representing a victim.

Materially and in form, each column is identical – made in stainless-steel and cast in the same mould – but on their surfaces they have grains of difference because the mould was made from sand. This communicates “the meaning of the overall memorial”, says Groarke, while making each very, very individualistic: back to the idea of the single and the collective experience.

The practice also collaborated “on the margins of architecture” to create a temporary art installation in Islington, London, called The Double Club. The conversion of a 19th century warehouse into night club, became critical to the practice’s research in experimenting with – and how visitors make sense of – overlapping and adjacent cultures. It also led them to look at how different types of environment affect behaviour. It was “a lesson in how architecture enables people to respond in an emotional” and not just an expected way, says Groarke.

Architecture can also make people respond in a prescribed way; something the practice did with its back-lit display boards in the Drawing Fashion exhibition at the Design Museum, which makes people lean in and look more closely at the artworks.

The series of spaces in The Double Club also informed later projects, from the temporary restaurant on top of a building overlooking the Olympics site in London in 2010 to the permanent building by Lake Windermere, won through a competition.

“Our first reaction to the brief,” says Groarke, “ was not to make a huge singular shed-like volume but something more analogous to a cluster of buildings – more typical of what you would see around the Lake District – with associations of agricultural or semi-industrial buildings.”

This again picks up themes of relationship with place, and they also hoped to create a form that was familiar somehow but made special by an embellishment.

They also did this in the temporary Maggie’s cancer care centre in Merseyside, made from a series of Portakabins, with a soft undulating interior that “made the environment utterly, utterly different from what you would expect from a Portakabin”. Views are another practice theme with, in Windermere, “links to intensive moments”.

Now a 20-strong practice working on more permanent projects, Carmody Groarke are bringing what they have learned from their art and temporary projects to this work. What they have found is that even a “temporary project starts to catalyse other things” both within the area where they are built – by reinvigorating it and bringing people in – and within an architectural practice’s way of working.