Years of decline have taken their toll on the elegant Francis Street building. A developer plans to renew it and create a vibrant Covent Garden-type amenity

The Iveagh Markets in the Liberties have been derelict since the mid 1990s. Publican/hotelier Martin Keane is developing the site into a stylish food and crafts market along with a 90-bedroom apart hotel. Video: Bryan O’Brien 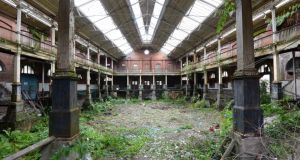 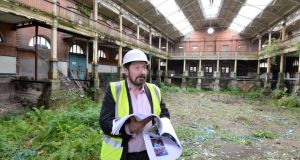 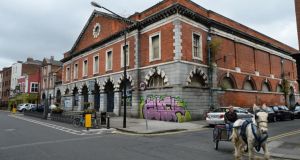 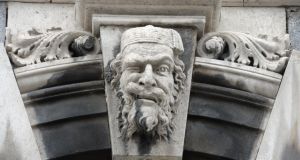 The Iveagh Markets are one of the most striking historic landmarks in the Liberties area of Dublin. The markets were commissioned by Edward Cecil Guinness, First Lord Iveagh, in 1906 to provide indoor markets for traders from nearby Patrick Street’s outdoor markets which were cleared for the building of the Bull Alley complex of Iveagh Trust housing and St Patrick’s Park. The new covered markets on the site of the former Sweetman’s Brewery were designed by architect, Frederick G Hicks, who also designed St Thomas’s Church on Cathal Brugha Street and parts of the Rotunda.

The Dublin Civic Trust’s book on Meath and Francis Streets describes the architecture of the markets as “a revived Georgian/ Queen Anne style with a classically inspired frontage to Francis Street dominated by a broad pedimented breakfront with arcaded entrance bays”. The keystone heads representing the five continents are an interesting embellishment on an already stylishly designed frontage.

The Iveagh Markets was originally divided into two main sections – a clothes market in the main hall fronting on to Francis Street and a “wet market” to the rear, selling fish, fruit and vegetables, accessed from the entrance on John Dillon Street. The roof structure was built from glazed iron, supported by cast iron columns with large gates at key points around the market. A house was also built for the overseer of the market on Francis Street which still stands today – as does the attractive Arts and Craft style building on Lamb Alley which served as a public washing house. Disinfecting chambers (the “delousing house”) have since been demolished.

The Iveagh Trust bequeathed the markets to Dublin Corporation in 1908 which continued to operate them until the mid-1990s. They were sold to Martin Keane, owner of Blooms Hotel and the Oliver St John Gogarty pub and hostel in Temple Bar in the early 2000s.

The Dublin Civic Trust is also concerned about the rapidly deteriorating brickwork. “There is extensive water ingress evident in the outside walls, which is causing the glossy fired face of the Victorian bricks to spall. It’s a vicious cycle of erosion that is difficult to repair and should be arrested as soon as possible to ensure the long-term health of the building’s fabric,” says Graham Hickey, conservation research officer of the trust.

“I’d like to make it clear also that these properties are not in Nama and they are debt-free. I will be employing between 350-400 people in the construction work and, when opened, there will be between 450 and 500 employed – including self-employed crafts people – in the markets, the hotel and the apart-hotel on the Mother Redcap’s site,” adds Keane who says the project is “his lifetime dream”. The plans include replacing the covered-in arches with glass to bring more light into the interior, a large staircase and balconies.

“We have to underpin the whole building first and then we’re ready to go as we’ve less than three years left on the planning permission,” he says. “I have visited markets all over the world and I plan to have this one open seven days a week so people can come here for food tastings and performances.” Keane says he bought the two properties for €14 million, has spent €9.5 million so far and will need to spend €78 million more. This will come from personal funds and loans from financial institutions and he hopes to get European funding for the heritage element of the project.