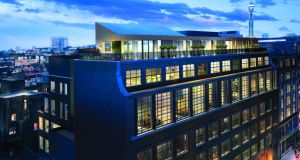 One of the world’s greatest creative hubs, the old Central St Martins College building at London’s 107-109 Charing Cross Road, is about to be reinvented as an apartment block with loft-style accommodation.

Located in the heart of Soho, and known for its eclectic mix of arts and crafts and moderne, creatives such as designer Sir Terence Conran, actor Colin Firth, artist Antony Gormley have all passed through its doors.

Fashion past pupils of Central St Martins (pictured above in a computer-generated graphic of the finished design) read like an industry who’s who. They include Alexander McQueen, Stella McCartney, Riccardo Tisci, Sarah Burton, Phoebe Philo and David Koma. Our own Sharon Wauchob, Simone Rocha and Joanne Hynes also attended.

The project will feature 13 two- and three-bedroom loft apartments with stunning views over London’s West End. The apartments will range in size from 117sq m (1,259sq ft) to 269sq m (2,896sq ft) with prices starting from £2.275 million through Jones Lang LaSalle. There are seven remaining properties available.

Lifschutz Davidson Sandilands will be responsible for its reinvention. The firm has worked on the landmark Oxo Tower, and several of Harvey Nichols’ restaurants and Rome’s chichi department store, La Rinascente. Last year. its work on Moscow’s Tsvetnoy Central Market was awarded inaugural Best Interior Design Award by the Society of British Interior Design and was voted Russia’s store of the year by Vogue.

Central St Martins moved out in 2011 to a new premises near Granary Square in King’s Cross.

The development ranges from duplexes with double-height spaces and original-style Crittall windows, to lateral apartments with large terraces and penthouses commanding exceptional views .

The contemporary loft-style interior is being overseen by Darling Associates.