Homemade Irish bread – but where’s the flour from? 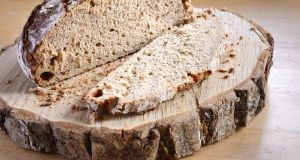 A handful of pioneering farmers are trialling traditional Irish wheat varieties to show how our climate can produce high-protein flour. Photograph: Getty Images

Who could ever have guessed that the Irish would return to baking with such a zeal this year? That homemade loaves would become symbols of reassurance and self-determination. Take away our liberty and livelihoods but leave us access to flour, water and a pinch of salt for sourdough bread.

It was a noble instinct, and yet, since most of our flour is imported from Canada, Italy, England or France, it’s hardly a gesture of independence. The 660 ruined grain mills scattered throughout the country are testament to the fact that Ireland produced its own flour for thousands of years, and we can do so again, as evidenced by the handful of pioneering farmers who are trialling traditional Irish wheat varieties to show how our climate can produce the high-protein “strong” flour that is needed for sourdough and yeast baking.

We need now to start supporting these few farmers who are growing quality wheat in Ireland and to consider using less imported wheat, much of which is grown in unsustainable, chemical-dependent ways and is overly gluten-enriched, making it hard to digest.

Irish wheat yields are unlikely to match the strains grown in warmer countries, so we need to be prepared to pay a little more, just as we do for single-estate coffee, sustainably-grown cocoa or good virgin olive oil.

For a truly homemade loaf consider using wheat that is grown and milled locally. James Kelly of Ballymore Organics in Ballymore Eustace, Co Kildare is selling 5kg of stoneground organic flour which he grows, dries, mills and packages himself for €20 with free delivery. He will sell 10kg of the unmilled grain for the same price. ballymoreorganics.ie

The Workman family in Dunany, Co Louth likewise produce their own organic wheat, rye and spelt for about €4 for 1.5kg. dunanyflour.com

The Mosse family, who have been milling wheat for seven generations in Bennetsbridge, Co Kilkenny produce a range of Irish-grown wheat, rye and spelt flour under The Little Mill brand. thelittlemill.ie

Also in Kilkenny, Oak Forest Mills grow and stone-grind spelt and einkorn wheat, which sells for €18 for 5kg bags at some farmers markets. oakforestmills.ieThere are numerous other small-scale growers and millers, such as Uncle Aidan’s wholemeal flour that is grown in Ballyhamilton Farms and stoneground locally at an authentic water mill at Ballyminane Mills, Co Wexford, and also Donal Creedon at Macroom Mills produces stoneground flour from wheat grown in Kildare and Meath.

Some of these flours may not contain enough protein to make truly bubbly sourdough or yeast bread, but you can add some imported “strong” flour to them, or else accustom yourself to less leavened bread without an excess of baguette-type holes in it. What’s certain is that if we support these brands they will be able to continue to experiment and expand their range and encourage other farmers to get involved in growing high-protein “strong” wheat. As is often the case, the power in these matters lie more in our pockets than we think.